Update Required To play the media you will need to either update your browser to a recent version or update your Flash plugin.
By Christopher Jones-Cruise
25 June, 2016


Scientists are debating how to limit their newly-discovered power to change genetic structure.

Scientists already modify the genes of farm animals and agricultural plants to make them more productive or stronger. But now they can also change genes in wild animals and plants. These genes would continue into later generations.

For example, it may be possible for scientists to remove from existence the kind of mosquitoes that carry the Zika virus. They might also be able to permanently remove species of plants and animals that are destructive to other species.

In a report published last week, the U.S. National Academies of Sciences, Engineering and Medicine (NAS) said it supports continued research on this kind of gene control. But it warned that it is not possible to know what will happen when these changed plants and animals are released into the wild. 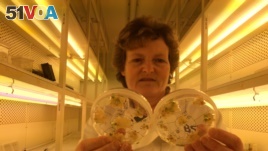 Professor Wendy Harwood in a plant breeding incubator room with barley plants that have undergone gene editing at the John Innes Centre in Norwich, Britain, May 25, 2016.

Sixteen biologists, ethicists and policymakers are on an NAS committee that is examining the issue. They say that there is value to the new technology. But, they say, there is not enough evidence to support the release of modified organisms from the laboratory into nature.

Many people would support stopping mosquitoes and rats from carrying diseases. But scientists say we must understand the possible scientific, ethical, legal and social results of such action before we decide whether to take it.

Gene modification is spread through reproduction.

Changed genes will continue to spread as long as an animal or plant continues to reproduce. They cannot be limited to a farm or kept within a country's borders.

Scientists are wondering what would happen if a modified organism mates with another species. They are not yet sure how the modified genes would affect the other species. It is possible that those genes could harm those creatures or even lead to their disappearance from our planet.

VOA's George Putic reported this story from Washington. Christopher Jones-Cruise adapted it for Learning English. Caty Weaver was the editor.

modify – v. to change some parts of (something) while not changing other parts