Update Required To play the media you will need to either update your browser to a recent version or update your Flash plugin.
By Bryan Lynn
08 August, 2018


Researchers say a new genetically modified rice can prevent infections of HIV, the virus responsible for the disease AIDS.

The researchers recently published their findings in a study in the journal Proceedings of the National Academy of Sciences (PNAS). The team included scientists from America, Britain and Spain.

The study reports the newly-developed rice produces proteins that attach directly to the HIV virus. This process prevents the virus from mixing with human cells. The scientists say this can neutralize the virus and block its transmission.

The Joint United Nations Program on HIV/AIDS or UNAIDS reports that worldwide, nearly 37 million people were living with HIV in 2017. The organization says the largest number of those were in developing countries. Nearly two-thirds of HIV cases are in Africa. 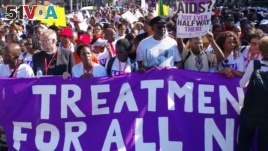 In this file photo, civil rights activists march in Durban, South Africa, July 18, 2016 at the start of the 21st World Aids Conference.

There is currently no cure for HIV/AIDS. But there have been major developments in oral drug treatments shown to slow the progression of the disease. Such treatments can also reduce the chances of passing the virus onto others. Researchers have also worked on finding a vaccine.

UNAIDS says new HIV infections and AIDS-related deaths have been reduced by about 50 percent over the past two decades.

The new study predicts the rice-based method will lead to long-term deployment of the anti-HIV treatment across the developing world. Researchers said the "groundbreaking" discovery is "realistically the only way" that anti-HIV combination treatments can be produced at a cost low enough for the developing world.

The scientists say the easiest and most cost-effective way to use the rice will be to make it into a cream to be put on the skin. The HIV-fighting proteins can then enter the body through the skin.

People in all parts of the world could grow the rice and make the cream themselves, the researchers said. This would prevent the cost and travel required for many patients to receive treatments and medicine, especially in the developing world.

The scientific team says further testing is needed to make sure the genetic engineering process does not produce any additional chemicals that could be dangerous to people.

The process of changing the genetic structure of food crops has been debated for some time. Such foods are commonly called GMOs - for genetically modified organisms, or GEs – meaning genetically edited. Critics of genetically engineered crops believe they can harm people.

Bryan Lynn wrote this story for VOA Learning English, based on reports from PNAS.org and other online sources. Hai Do was the editor.

modified – adj. changed in a way to improve something

neutralize – v. produce an effect that removes the effect of something else

transmission – n. the process of passing something from one person or place to another

groundbreaking – adj. original and important; showing a new way of doing or thinking about things