Update Required To play the media you will need to either update your browser to a recent version or update your Flash plugin.
By Pete Musto
26 August, 2018


As temperatures rise in the western part of the United States, wildfires grow in size as well.

The Associated Press has studied information on weather and wildfires from the last 35 years. The media group's findings show that the years in which wildfires burned the highest number of hectares were also years with the hottest weather.

The report said the amount of land burned in wildfires has more than doubled. 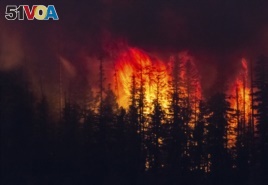 Fires need something to cause them to start. They also require oxygen and fuel to keep them going. The report says global warming increases the supply of fuel by drying trees and other plants.

Mike Flannigan, a fire scientist with the University of Alberta in Edmonton, Canada, spoke to the Associated Press.

"Hotter, drier weather means our fuels are drier, so it's easier for fires to start and spread and burn more intensely," Flannigan said.

The period of April to September is fire season in the U.S. The National Interagency Fire Center is the governmental group responsible for organizing the country's efforts to fight wildfires. The National Oceanic and Atmospheric Administration, or NOAA, studies weather conditions.

Data from the two agencies demonstrates that higher air temperatures are severely affecting conditions during fire season. Since 1983, the five hottest fire seasons in the western U.S. produced fires that, on average, burned more than 35,000 square kilometers.

That is three times the average for the five coldest fire seasons.

So far this summer, temperatures in the western United States have reached more than 1.7 degrees Celsius above the 20th century average. In July, California recorded its hottest month in 124 years of record-keeping.

The Associated Press examined the federal fire data from the last 35 years. It found that the fire seasons that had the largest fires were in years that temperatures reached several degrees hotter than the 20th century average.

Tim Brown is the western regional climate center director for NOAA. He said the fuel wetness levels in California and Oregon are close to record lows.

Jennifer Balch is a University of Colorado fire scientist. She said that reduced wetness in the air is "the key driver of wildfire spread." She predicted the western U.S. soon will start to see wildfires of over 400,000 hectares.

"You kind of keep saying, ‘How can they get much worse?' But they do," Sugaski said.

The number of U.S. wildfires has not changed much over the last few decades, but the size of areas burned has greatly increased.

Randy Eardley is chief spokesman for the National Interagency Fire Center. He pointed to the year 2000 as "some kind of turning point," in wildfires.

Some people who reject climate science point to data that seems to show far more land burned in the 1930s and 1940s. But Eardley said data before 1983 is not dependable.

Nationally, more than 23,050 square kilometers have burned this year. That is already 28 percent more than the 10-year average and fire season continues.

Scientists generally avoid blaming global warming for any given extreme event without extensive research. But fire and weather scientists have done those extensive examinations of wildfires.

John Abatzgolou of the University of Idaho looked at forest fires and dry conditions in the western United States. The data covered from the years 1979 to 2015. He compared that data to computer-based models of what would be expected with no human-caused climate change. He concluded that global warming was partly to blame for an extra 42,000 square kilometers of forests burning since 1984.

The 2015 Alaska fire season is the second biggest on record. A similar comparison with a computer-based model found that human-based climate change increased the fire risk by 34 to 60 percent.

One 2015 study said worldwide fire seasons are about 18.7 percent longer since 1979. Another study that year said climate change is increasing extreme wildfire risk in California, where wildfires already are year-round.

Also, insects and a lack of water have killed 129 million trees in California since 2016, creating more fuel.

Interior Secretary Ryan Zinke recently told Breitbart radio that "what's driving" increased wildfires is an increase in fuel. He said the government has "been held hostage by environmental terrorist groups." These groups oppose clearing dead trees that they say act as homes for animals.

However, Zinke did admit that climate change did play a part in worsening wildfires.

Seth Borenstein reported this story for the Associated Press. Pete Musto adapted it for VOA Learning English. Caty Weaver was the editor. We want to hear from you. What do think governments can or should do to prevent the spread of wildfires? Write to us in the Comments Section or on 51VOA.COM.

regional – adj. describing a part of a country or of the world that is different or separate from other parts in some way

conclude(d) – v. to decide something after a period of thought or research