Update Required To play the media you will need to either update your browser to a recent version or update your Flash plugin.
By Bryan Lynn
18 May, 2018


Scientists have found that levels of a now-banned chemical are rising again in Earth's atmosphere.

The chemical is called CFC-11. It is the second most common kind of CFC, short for chlorofluorocarbon.

Chlorofluorocarbons were once widely used in many products. They were in air conditioners, refrigerators and spray cans. CFCs were added to insulation foam and fire suppression products.

Scientists discovered over 40 years ago that these man-made chemicals can reach Earth's upper atmosphere. In the 1980s, CFCs were blamed for making a hole in Earth's ozone layer.

Ozone is a form of oxygen. It is found in the air we breathe and in Earth's stratosphere. The ozone layer protects life on our planet by blocking harmful radiation from the Sun.

But closer to Earth's surface, ozone is a common pollutant. It can harm people, crops and other plants. 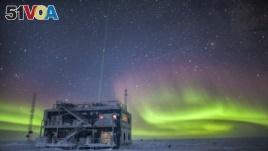 This undated photo provided by NOAA in May 2018 shows aurora australis near the South Pole Atmospheric Research Observatory in Antarctica. (Patrick Cullis/NOAA via AP)

The first step in international efforts to protect the ozone layer was an agreement called the Montreal Protocol. It was signed in 1987 in an effort to end or sharply reduce the use of over 100 known ozone-eating CFCs. The protocol called for a complete ban on CFC-11 by 2010.

But scientists say the banned substance did not disappear. Beginning in 2013, emissions of CFC-11 mysteriously started rising again.

Results of a new study on the rising emissions were published in the science journal Nature.

Scientist Stephen Montzka was one of the writers of the study. He is with the United States National Oceanic and Atmospheric Administration. The agency keeps detailed information about Earth's climate.

"We're raising a flag to the global community to say, ‘This is what's going on,'" Montzka said. "And it is taking us away from timely recovery of the ozone layer."

He added that further work is needed to find out exactly why CFC-11 emissions are rising, and to find ways to stop it.

Countries have reported close to zero production of the chemical since 2006. But the study found that about 13,000 metric tons have been released each year since 2013.

Small amounts are thought to come from foam or buildings, but scientists say they are seeing much higher levels than that. The chemical can also be a byproduct in other chemical manufacturing, but it is supposed to be captured and recycled.

Each year, natural processes remove about 2 percent of CFC-11 from the air. Scientists say the chemical can stay in the atmosphere for about 50 years.

Measurements taken from around the world suggest the CFC-11 emissions are coming from northeastern Asia, the study found.

"Either someone's making the banned compound or it's sloppy byproducts that haven't been reported as required," Montzka said. He added that if the source of the new emissions can be identified and controlled soon, damage to the ozone layer should be minor. But he said if not dealt with soon, there could be great delays in the ozone layer's recovery.

Other experts go even further.

Ross Salawitch is an atmospheric scientist with the University of Maryland. He told the Associated Press he thinks the rising chemical levels are the result of "rogue production." He added that if such increases continue, recovery of the ozone layer will be threatened.

Bryan Lynn wrote this story for VOA Learning English, based on reports from the Associated Press and other sources. George Grow was the editor.

refrigerator – n. a device that keeps food and drinks cool

foam – n. a soft material used in many products

global – adj. of or related to the whole world

sloppy – adj. not careful or neat

rogue – adj. used to describe something or someone that is different from others, usually in a dangerous or harmful way