Update Required To play the media you will need to either update your browser to a recent version or update your Flash plugin.
By Bryan Lynn
28 August 2022


Scientists are investigating the possibility that a second asteroid hit Earth about the same time as the one believed to have killed off nearly all dinosaur life.

The investigation is linked to a smaller crater recently discovered in the ocean. Researchers say the crater may have been created by a large asteroid.

Scientists have long believed that a large asteroid hit Earth about 66 million years ago near Mexico's Yucatán Peninsula. They estimate the force of the crash to be equal to the strength of about 10 billion nuclear bombs. 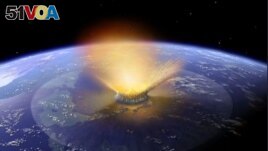 The strike, or impact, is believed to have caused widespread wildfires, earthquakes and huge ocean waves, or tsunamis. Scientists also believe the event caused a release of chemicals into the atmosphere that led to severe cooling.

The climate-changing event is blamed for causing the disappearance of more than 70 percent of plant and animal life. All dinosaurs that were not bird-like died out.

That strike created a huge crater about 180 kilometers wide and 900 meters deep.

Researchers say the newly discovered crater, found in the North Atlantic Ocean, is much smaller. It is about 8.5 kilometers wide. It is buried up to 400 meters below the seabed off the coast of Guinea, in West Africa.

Scientists found the crater by using seismic instruments. Such tools are designed to measure earthquakes and pick up other vibration signals on Earth.

The crater was discovered by Uisdean Nicholson, a geologist at Heriot-Watt University in Edinburgh, Scotland. At the time, Nicholson was working on an ocean-mapping project involving seabed spreading. This kind of spreading is what caused the African and American continents to separate over time, leading to formation of the Atlantic Ocean.

"I've interpreted lots of seismic data in my time, but had never seen anything like this," Nicholson said in a statement. He added that he was surprised to see that the data described a huge crater "with very unusual characteristics."

Nicholson said the crater has several elements that suggest it could have been created by an asteroid. But he noted that researchers will need to investigate more before that theory can be confirmed. A team plans to visit the crater to drill into the seabed and collect mineral samples.

The team's findings were recently reported in a study in the publication Science Advances.

Veronica Bray is another member of the research team. She is a planetary scientist at the University of Arizona. Bray used computer simulations to predict the effects that such an impact would have had.

The simulations suggested the crater was created by a 400-meter asteroid crashing into 500 to 800 meters of water. She said this would have likely caused a 900-meter-high tsunami, as well as an earthquake with a strength of 6.5.

Bray noted the effects of the newly discovered crater would have been much less than the one that hit present day Mexico. But it still would have added "significantly" to local destruction. She said the new discovery makes her wonder whether there are other impact craters that scientists have not yet found.

Nicholson said his team has considered the possibility that both impact craters could be linked. The researchers said they believe the newly discovered crater could have formed by the breakup of a parent asteroid.

Sean Gulick is a crater impact expert at the University of Texas at Austin. He called the find an "exciting" discovery that could lead to further investigations of other possible impacts around the same time period.

"Despite four billion years of impactors hitting Earth, only 200 have been discovered," Gulick said in a statement. "It is thus exciting news whenever a new potential impact is discovered, especially in the hard-to-explore (ocean) environment," he added.

Bryan Lynn wrote this story for VOA Learning English, based on reports from Heriot-Watt University, the University of Arizona and Science Advances.

interpret – v. to explain of explore the meaning of something