Update Required To play the media you will need to either update your browser to a recent version or update your Flash plugin.
By Anne Ball
30 August, 2017


A storm named Harvey set a rainfall record in the continental United States this week. It dumped 1.32 meters of water over southeastern Texas.

The former rainfall record was set in 1978 as Tropical Storm Amelia dropped 1.21 meters of rainfall in the same area, according to the National Weather Service.

Scientists say this may show what the future will be because of global warming. They say climate change did not cause Harvey. But they note that warmer air and water mean wetter and possibly more intense hurricanes in the future.

"This is the kind of thing we are going to get more of," said Princeton University climate scientist Michael Oppenheimer. "This storm should serve as warning." 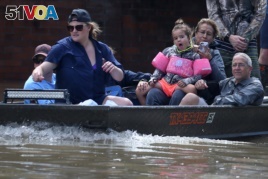 People ride a boat though flood water after being evacuated from the rising water following Hurricane Harvey in a neighborhood near Houston, Texas, U.S., August 30, 2017.

Scientific methods can be used to study if Harvey is tied to man-made climate change. It involves complex mathematical processes. And it will take weeks or months to complete the study and even longer to be reviewed by other scientists.

But in general, climate scientists agree that the future storms will drop much more rain than the same sized storms that came before.

Warmer air holds more water. For every degree Celsius, the atmosphere can hold, and then drop an extra 7 percent of water, according to several scientists. Global warming also means warmer seas. And it is warm water that fuels hurricanes.

Hurricanes need air temperatures of at least 26 degrees Celsius for fuel. The water in the Gulf was at least that warm, 100 meters deep, according to University of Miami hurricane researcher Brian McNoldy.

Jeff Masters is meteorology director for Weather Underground. He says when Harvey moved toward Texas, water in the Gulf of Mexico was nearly 1 degree Celsius warmer than normal.

Climate scientists are still debating what role, if any, global warming may have played in causing Harvey to stall, or stop and sit over Texas. The storm not moving on was the big reason for the disastrous flooding. All that rain would not have landed in any one area if the storm had moved on like other normal ones

Harvey stalled because it was between two high-pressure weather fronts. They pushed it in opposite directions, and trapped it in place.

Princeton's Oppenheimer theorizes that there is a connection between melting sea ice in the Arctic and changes in the jet stream and the weather patterns that make these "blocking fronts" more common. He is not the only one thinking this. But others say it is too early to know .

Cliff Mass says climate change is not powerful enough to create an event like Harvey's rainfall. He is an atmospheric scientist at the University of Washington.

"You really can't pin global warming on something this extreme. It has to be natural variability," Mass said. "It may juice it up slightly but not create this phenomenal anomaly."

"We're breaking one record after another with this thing," Mass said.

Anne Ball adapted this story for Learning English from several VOA News story. Hai Do was the editor. We want to hear from you. Write to us in the Comments Section and visit us on 51VOA.COM.

jetstream – n. a strong current of fast winds high above the Earth's surface

pin – v. to prevent or stop (someone or something) from moving by holding or pressing firmly against something

variability – adj. able or likely to change or be changed : not always the same

anomaly – n. something that is unusual or unexpected