Update Required To play the media you will need to either update your browser to a recent version or update your Flash plugin.
By VOA
22 October, 2012

This is SCIENCE IN THE NEWS, in VOA Special English. I'm Christopher Cruise.

And I'm Jim Tedder. Today, we report on the search for new ways to treat infections. We tell how researchers used DNA, deoxyribonucleic acid, to study the roots of the English language. And we tell about an experiment that shows you can learn while you sleep.

In nineteen twenty-eight, a British scientist made a chance observation. He found that some mold had grown in bacteria in a culture plate in his laboratory. Molds can do that. But this mold that had somehow gotten into the plate had the ability to kill the bacteria around it.

Researchers say anti-bacterial protein PlyC could be effective antibiotic alternative
The scientist, Alexander Fleming, found that the mold was a member of a common group known as Penicillium. Fleming and two other scientists, Ernst Boris Chain and Howard Walter Florey, went on to win the Nobel Prize in nineteen forty-five. They were honored "for the discovery of penicillin and its curative effect in various infectious diseases."

So scientists are searching for new ways to treat infections. Recently, researchers in Australia said they made an important discovery. Scientists at Monash University in Melbourne believe an antibacterial viral protein called PlyC could be used as an alternative to antibiotics. 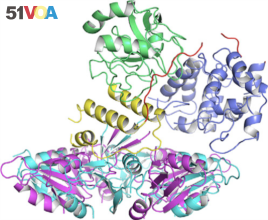 The cartoon model of the PlyC holoenzyme
This protein was first identified as a possible treatment for infections in nineteen twenty five. But the research ended following the discovery of antibiotics.

Now, scientists have spent six years studying the structure of the protein. They have found how it kills the bacteria that cause sore throats, pneumonia and streptococcal toxic shock syndrome.

Australian researchers worked with scientists at the Rockefeller University in New York and the University of Maryland. Their findings appeared in the Proceedings of the National Academy of Sciences.

Sheena McGowan from Monash University describes the protein as a powerful bacterial killing machine. She says it looks like a flying saucer carrying a pair of warheads. It connects to the surface of the bacterium and then cuts through the outside to destroy it.

Dr. McGowan says it could be highly valuable when conditions like pneumonia do not respond to traditional treatments.

"There's antibiotics at the moment for those particular types of diseases. We sort of see that there's a bit of resistance being built up in the bacterial community almost, and some of our antibiotics aren't quite as effective as they used to be. So this kind of ground route, basic research needs to be done quite early so that we have some time to develop them as safe human therapeutic over the timeframe when the antibiotics can keep working."

The researchers have been studying PlyC's atomic structure in hopes of developing a drug. They say they have had success in treating streptococcal infections in mice. But an effective human treatment in the form of a pill or nasal spray may be at least ten years away.

One of the jobs of an evolutionary biologist is to study the genetic material of viruses. Studying the DNA can show where a virus came from, how it changed over time and how it is related to other viruses.

Now, scientists have borrowed this idea for a completely different purpose: to study the roots of the first Indo-European language. Indo-European is a family of several hundred related languages including English, French, Russian and Persian.

Indo-European is one of the largest language families in the world. It covers an area from Iceland in the west to Sri Lanka in the east. One theory says it developed six thousand years ago and was spread by a horse-riding people in the Russian Steppes north of the Caspian Sea. Another theory says the common ancestor of Indo-European was first spoken in what is now Turkey. This theory says it began eight thousand to nine thousand five hundred years ago and spread with agriculture.

The new study offers support for this second theory. Quentin Atkinson, an evolutionary psychologist at the University of Auckland in New Zealand, led the study. He says his team worked in much the same way that evolutionary biologists do to identify the origin of virus outbreaks.

The researchers used a statistical method that evolutionary biologists use to show how different species are related on a family tree. They analyzed two hundred two cognates, or words with shared meanings and similar sounds. They studied them across one hundred three languages, including twenty that are no longer spoken.

Quentin Atkinson says examining the similarities and differences in these cognates helped establish family ties. For example, in English and other Germanic languages, the word for "water" sounds something like the English word "water" or "wasser" in German. But in the Romance languages that came from Latin, the word sounds a lot different, something like "agua" in Spanish or "acqua" in Italian.

Mr. Atkinson says that although some words are more closely related than others, they are tied together on branches of the Indo-European family tree.

"We know where the languages are. They are like the leaves of the tree, and we know how they are connected, and we trace back along those branches back through time and space to work out where the origin is."

He argues that Indo-European started to expand across Europe with the spread of agriculture.

"We can see the spread in the archeological record. So the argument is that agricultural populations were able to increase their population density relative to hunter gatherer populations around them, and so they expanded out generation by generation."

The study appeared in the journal Science. Quentin Atkinson says the method used to study the origins of the Indo-European language family could also be used with other language groups.

Last year, he published a report in Science exploring the earliest history of human language. He suggested that modern languages began in southwestern Africa. For that study, he borrowed an idea that comes not from evolutionary biologists but from scientists who study population genetics. They call it the "serial founder effect." It offers a scientific explanation for why there are fewer genetic differences in populations the farther away they live from Africa. Scientists say this decrease in diversity shows that modern humans originated on the continent.

Quentin Atkinson reported finding a similar effect in language. He based his study on the phonemes -- the basic speech sounds, like vowels and consonants -- in about five hundred different languages. He reported that languages in southwestern Africa had the most phonemes, while the numbers decreased with distance from the continent. Mr. Atkinson says his findings support the theory that modern humans expanded from Africa. Some other scientists, however, suggested that the results of his study were weak and failed to prove where language started.

Imagine you are walking down the street. As you pass a bakery, someone opens the door.

Ah...what a wonderful smell. Freshly baked bread, just out of the oven. You breathe deeply, letting that great smell fill your lungs. Life is good!

Now imagine that as you keep walking, you pass a fish market. A worker has just thrown a box full of rotting fish parts into a waste basket.

Oooh! Whew! The smell is so bad, you take only a short breath and hurry on your way.

Anat Arzi of the Weizmann Institute of Science in Israel imagined this kind of reaction recently when she performed sleep experiments in her laboratory. First, she made sure that her volunteers were in a deep sleep...no peeking ...eyes tightly closed.

Then she opened a bottle of sweet smelling shampoo...and then...and this is important... played a soft musical note.

Then, she held something rotten under the volunteer's nose ...and played a different sound.

One of the best things about this kind of experiment is that it did not wake the volunteers. And when they were awakened, they had no memory of what had happened.

The next morning, after the people woke up, they thought the experiment was done. It was then that Anat Arzi played one of the sounds used while they were asleep and carefully measured their breathing. What she found was that the human brain, even while asleep, had learned to connect the smell with the sound.

This caused the patient to take a long, deep breath.

This caused a short intake of air.

So, what does all this mean? Ms. Arzi and her professor, Noam Sobel say it shows that we can learn while we are asleep. They may be the first scientists to use the sense of smell in this way as part of a sleep experiment. Their study was published in the journal Nature Neuroscience.

They hope that future experiments will show that we can learn much more difficult things while sleeping. Like chapter three in your calculus book, or how to write a new computer software program. Now that would be a sweet dream!?
Related Articles
go top