Update Required To play the media you will need to either update your browser to a recent version or update your Flash plugin.
By Anne Ball
22 October, 2017


Witnessing a neutron star violently crash into another has helped astronomers uncover secrets of the universe — including how gold was created.

Neutron stars are the collapsed centers of stars. These two neutron stars circled each other at a very fast rate, getting closer and closer. Then they crashed into each other in an event called a kilonova.

This collision created a burst of gamma rays, or electromagnetic energy, and gravitational waves, which make a weak signal when they reach Earth.

Vicky Kalogera is an astrophysicist with Northwestern University near Chicago. She explains what the astronomers heard and saw two months ago.

"So this is the first time that we hear the death spiral of two neutron stars. And we also see the fireworks that came from the final merger."

What they saw was a bright, blue light. The colliding stars released very hot wreckage. All that material, the light and heavy elements, is now speeding through the universe in different directions.

This is an artist's animation of what it looked like when the two neutron stars crashed, with gravitational waves and gamma ray bursts (pink or magenta) shot out. Debris was sent out too. Credit: NASA Goddard.

Some of the material joined together to form metals, like gold, platinum and uranium. Scientists had thought neutron star collisions had enough power to create heavy elements, but they had not been sure until they observed it.

David Reitze is with the California Institute of Technology and the Laser Interferometer Gravitational Wave Observatory, or LIGO. At a press conference last week in Washington D.C., he held up his great grandfather's gold watch.

"It's about 100 years old. The gold in this watch was very likely produced in the collision of two neutron stars approximately billions of years ago. We don't know exactly when. So this is really an amazing discovery." 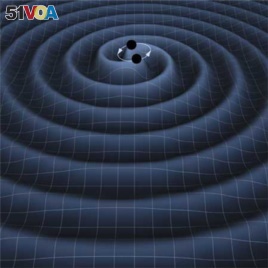 Gravitational waves are very small ripples, or movements, through space time in the universe. Albert Einstein was the first person to suggest the existence of such waves. Researchers were first able to observe them with the LIGO detectors in 2015. Earlier this month, three scientists won the 2017 Nobel Prize in Physics for their work measuring gravitational waves.

The first gravitational waves ever measured were produced by black holes, which do not let out any light. So, they were not seen. But they had been heard. This is what they sounded like.

Listen for the "chirp" sound.

FILE: These plots show the signals of gravitational waves detected in 2015 by the twin LIGO observatories at Livingston, Louisiana, and Hanford, Washington. The signals came from two merging black holes.

The signal arriving on August 17th was a different story. Around the world, astronomers reacted to the sign al quickly when they recognized it. They aimed telescopes on every continent, and even those orbiting Earth, on a distant spot in the sky.

This time, there was plenty to see.

What they saw was the long ago, and far away, crash of two neutron stars. They were so dense that a teaspoon of their matter would weigh 1 billion tons. It took the signal 130 million light years to reach Earth — a distance of 9.5 trillion kilometers.

The sound and light from the crash told the story of one of the most violent acts in the universe. The ability to see the light from gravitational waves was just one of the mysteries solved, noted Daniel Holz. He is an astrophysicist working at the University of Chicago, and one of the more than 4,000 scientists who witnessed the event.

"Not only did we detect that but we detected this burst of gamma rays. That's also never been done before, so now we get to say when two neutron stars crash into each other, they create a gamma ray burst. We get to connect two very mysterious happenings in the universe together and that's a big deal."

Holz added that all the information collected from this event provided scientists with another important discovery. They now get a new measurement for the size of the universe and how quickly it is expanding.

Astrophysicist Vicky Kalogera said the scientific community gained a lot from this one event.

"So it's amazing to think that in one day, in a few hours and the weeks that followed, all these predictions were confirmed. So we solved a lot of mysteries. But at the same time, we also opened up a few questions, as Julie said. Not everything fits perfectly in the puzzle."

Scientists say that this single kilonova event increased their understanding of the universe. They also say it marks the beginning of a new area of scientific study: gravitational wave astronomy.

Julie McEnery, is an astrophysicist working at the American space agency's Goddard Space Flight Center in Maryland. She told VOA "We're able to combine dramatically different ways of viewing the universe, and I think our level of understanding is going to leap forward as a result."


Anne Ball wrote this story for VOA Learning English. Her story was based on reports from the Associated Press and the Reuters news agency. George Grow was the editor.

neutron star – n. a very dense object in space that consists of closely packed neutrons and is produced by the collapse of a much larger star

gamma ray – n. a ray that is like an X-ray but of higher energy and that is given off especially by a radioactive substance

gravitational wave – n. a very small ripple or movements through space time in the universe.

spiral – n. a circular curving line that goes around a central point while getting closer to or farther away from it

watch – n. a device that shows what time it is and that you wear on your wrist or carry in a pocket

leap – v. to jump from a surface