Update Required To play the media you will need to either update your browser to a recent version or update your Flash plugin.
By Dan Novak
26 June 2022


Scientists are trying to learn more about microorganisms that turn snow red and might cause snow to melt faster.

Recently, researcher Eric Marechal collected what he called "snow blood" from a mountain area 2,500 meters above sea level. Snow blood is a kind of algae that is red. Its dark color causes snow to melt more easily.

Scientist are concerned that the algae are spreading. 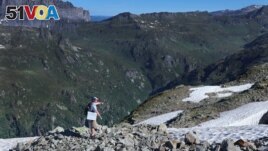 Eric Marechal, researcher at the Cell and Plant Physiology Laboratory at CEA, points to an area of search to find the Sanguina nivaloides algae, also known as "snow blood." (REUTERS/Denis Balibouse)

"These algae are green. But when it's in the snow, it accumulates a little pigment like sunscreen to protect itself," said Marechal. He is the research director at Grenoble's Scientific Research National Center. He and his coworkers collected algae to study in the laboratory on Le Brevent Mountain near the town of Chamonix in France.

The red-colored organism was formally identified and given its scientific name Sanguina nivaloides in 2019.

Scientists are now trying to understand snow blood. Snow volume is decreasing because of rising global temperatures. This change in climate is especially affecting the Alps Mountains.

There is a "double reason" for studying the algae, Marechal explained. "The first is that it's an area that is little-explored and the second is that this little explored area is melting before our eyes so it's urgent," he said.

Alberto Amato is a researcher at CEA Center in Grenoble. He said the volume of algae appear to be growing because of climate change. He said algae grow faster with higher amounts of carbon dioxide in the atmosphere.

The research is ongoing. But the scientists say it is clear that the presence of algae speeds the melting of snow. This is because algae's color reduces snow's ability to reflect the sun's heat.

Other kinds of algae, including a purple kind, as well as soot from forest fires have the same effect. If the algae do spread, snow and glacier melt around the world could speed up.

"The warmer it is, the more algae there are and the more the snow melts quickly," said Amato. "It's a vicious circle and we are trying to understand all the mechanisms to understand this circle so we can try to do something about it," he added.

Dan Novak adapted this story for VOA Learning English based on reporting from Reuters.

pigment— n. a natural substance that gives color to animals or plants

volume — v. the amount of something

reflect — v. to have lights bounce a surface and travel in the opposite direction

soot — v. the black powder that is the result of burning things

mechanism — n. a process that produces a specific result