Update Required To play the media you will need to either update your browser to a recent version or update your Flash plugin.
By John Russell
19 June 2022


Scientists studying the Tarantula Nebula say they have gained a greater understanding of how stars form.

The researchers also got a beautiful image of a large cloud of gas and dust that neighbors the Milky Way galaxy.

Researchers recently said their observations offered information about the connection between two competing processes – gravity and feedback. Gravity is the force that drives star formation, while the competing process, known as feedback, refers to the huge amounts of energy that large young stars introduce into their nearby environments to limit star growth. 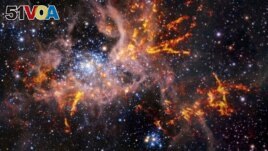 The Tarantula Nebula is an area of stars, gas and dust 600 light-years across. A light year is the distance light travels in a year - about 9.5 trillion kilometers.

The Tarantula Nebula's official name is 30 Doradus. It is about 170,000 light years from Earth.

It is called the Tarantula Nebula because its paths of gas, dust and stars look like spider legs. The nebula's gas mixture is much like that of the early universe: mostly hydrogen and helium.

The European Southern Observatory released a Tarantula Nebula image showing thin gas clouds that may be the remains of larger ones. Scientists think great bursts of energy from large young stars may have torn apart the gas clouds.

Guido De Marchi was a co-writer of the research published in The Astrophysical Journal and presented the work at a meeting of the American Astronomical Society.

"We see stars forming where there is a lot of gas and dust available, and there is definitely a lot of it in the Tarantula Nebula," De Marchi said.

Researchers were helped by observations from the Chile-based ALMA telescope.

De Marchi explained that "Stars form when gas clouds collapse under their own gravity and the gas gets denser and denser."

He added that these gas clouds "contract and warm up until the core is hot enough to start the stellar engine, an immense nuclear reactor."

De Marchi said that scientists used to believe that when very large stars – those 100 times bigger than the sun – begin to form they release so much energy that they shut off the fuel for more stars to form.

De Marchi added, "The beautiful observations of the Tarantula Nebula obtained with ALMA now show that where the gas is dense enough it continues to fall ... and new stars can keep forming. This is interesting and new."

The process De Marchi talked about is called feedback, in which large young stars release large amounts of energy in the form of photons and high-speed particles. The nebula's composition has led to the creation of particularly large stars, some 200 times as massive as our sun.

Tony Wong, the lead writer of the report, said Tarantula Nebula is the most extreme feedback environment scientists can observe.

"One of the big mysteries in astronomy is why we are still able to witness stars forming today," Wong said.

He continued, "Observations with ALMA can shine a light on what is happening deep within clouds and help us understand how gravity and feedback compete for influence to keep the rate of star formation under control."

formation — n. something that is formed or created; the act of forming or creating something

composition — n. the way in which something is put together or arranged

stellar — adj. of or relating to the stars

photon — n. a tiny particle of light or electromagnetic radiation