Update Required To play the media you will need to either update your browser to a recent version or update your Flash plugin.
By Jonathan Evans
14 September, 2019


For three days a week, Wayne Garcia has been taking part in a nontraditional exercise.

He starts by putting on virtual reality (VR) equipment on his head. He then gets on a specially designed exercise bicycle and starts pushing its pedals. Faster and faster he goes.

Garcia is taking part in a study at the University of Southern California's Keck School of Medicine. Researchers want to see if just a small amount of VR can help prevent memory loss as people age. 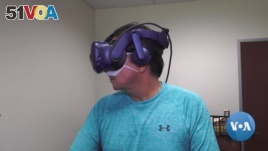 Garcia says he remembers how his parents and grandparents all suffered from dementia.

"It's very scary that one day that could be me."

Garcia recalls his father once reading a newspaper upside down and almost setting the house on fire by putting a towel on a heater.

"Just the sadness — you remember what your dad was like, what your mom was like when they were all good, and then the decline now. And now you're taking care of them rather than when they used to take care of you."

Garcia is taking part in the study to see if using virtual reality at the same time as physical exercise can help prevent dementia in the future.

Judy Pa is part of the team of researchers leading the study. She says the actual definition of "dementia is when a person is no longer able to take care of themselves, things like paying the bills, driving, cooking for themselves, dressing themselves."

She added that the break down and death of cells in the nervous system take 10 to 20 years.

Pa said that unlike usual games, VR provides a first-person, three-dimensional experience that is important to memory training.

"Our goal is to prevent dementia (and) to prevent Alzheimer's disease. There are no effective treatments yet. We hope that we will get there eventually, but my perspective and the research that we do in my laboratory at USC is really surrounding prevention."

The VR study exercises the subjects' body and brain at the same time, testing the memory and decision-making part of their brain.

Subjects have to pedal on the exercise bike and keep their heart rate up. In the VR experience, they are trying to learn and remember directions while collecting food items, and then feeding the food to some animals.

Even if virtual reality can help, it may not be for everyone. In one study, four out of 40 people withdrew from the research because they reported motion sickness. Pa will be doing more tests over the next year with participants who are 50 to 80 years old to gather additional information.

Garcia is hopeful for what VR might mean for the future.

"There might be a place where you could go, and you can get your daily dose of virtual reality and cardio to keep the mind going."

Elizabeth Lee reported this story for VOA News. Jonathan Evans adapted it for Learning English. George Grow was the editor.

bills – n. documents that says how much money you owe for something you have bought or used

cardio – n. any type of exercise that causes the heart to beat faster and harder for a period of time

decline –n. to become worse in condition or quality

dress – v. to put clothes on yourself

perspective – n. a way of thinking about and understanding something such as a particular issue or life in general

towel – n. a piece of cloth used for drying things

virtual reality – n. an artificial world of images and sounds created by a computer that is affected by the actions of a person who is experiencing it