Update Required To play the media you will need to either update your browser to a recent version or update your Flash plugin.
By Andrew Smith
20 January 2023


Scientists said this week that they used a high-powered laser to change the direction of lightning strikes for the first time. The laser was aimed at the sky atop Mount Santis in northeastern Switzerland.

Lightning is a powerful electrical discharge between a cloud and the ground, within a cloud or between clouds. It kills thousands of people and causes billions of dollars of damage to communication systems, power lines, and equipment each year.

American inventor Benjamin Franklin first invented the lightning rod in the 1750s. That technology is still used today but can protect only a small area. 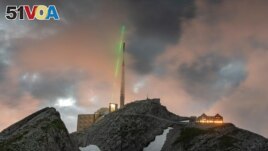 The Laser Lightning Rod is seen in action at the top of Mount Santis in Switzerland. (TRUMPF/Martin Stollberg/Handout via REUTERS)

Scientists say the new device, called Laser Lightning Rod (LLR), could increase protection by extending the height of rods hundreds of meters. With further development, LLR could improve protection for important places such as power stations and airports.

Workers brought the equipment to the top of Mount Santis at 2,500 meters by helicopter and gondola. The laser is the size of a large car and weighs more than 2,700 kilograms. It was aimed at the sky above a 124-meter Swisscom telecommunications tower, one of Europe's structures most affected by lightning.

The laser works by creating a beam of electrically charged particles called ions. The ions attract lightning, just as a metal lightning rod does.

In experiments during the summer of 2021, the LLR sent strong laser pulses 1000 times per second. The laser redirected all four lightning strikes that happened during the laser's operation.

"We demonstrate for the first time that a laser can be used to guide natural lightning," said physicist Aurelien Houard of Ecole Polytechnique's Laboratory of Applied Optics in France. He is the coordinator of the Laser Lightning Rod project and lead writer of the research published in the journal Nature Photonics.

Houard said that 10 to 15 years more work would be needed before the Laser Lightning Rod can enter common use. One worry is avoiding airplanes in flight. In fact, air traffic in the area was stopped when the researchers used the laser.

"Indeed, there is a potential issue using the system with air traffic in the area because the laser could harm the eyes of the pilot if he crosses the laser beam and looks down," Houard said.

Will Dunham wrote this report for Reuters. Andrew Smith adapted it for VOA Learning English.

rod -n. a rigid piece of material in the form of a thin bar

gondola -n. a car suspended under a moving cable, used to transport people and equipment

structure -n. a building or other man-made construction

beam -n. a line of energy or particles sent in a line of direction

pulse -n. an increased emission of energy or material at periodic, rhythmic intervals

potential -adj. possible for the future