Scientists Use Model to Predict Conditions for Life on Ancient Mars

Update Required To play the media you will need to either update your browser to a recent version or update your Flash plugin.
By Bryan Lynn
16 October 2022


A new study suggests that ancient Mars might have been able to support a large population of microscopic organisms.

French scientists used computer models to predict climate and land conditions under the planet's surface about 4 billion years ago.

The study said the microorganisms might have been growing just beneath the Martian surface. The microbes could have been covered by several centimeters of dirt. This would have protected them from severe radiation. 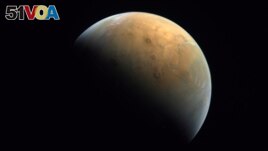 The researchers said any place free of ice on Mars could have been filled with the living organisms. But, if they did exist, these simple life forms would have changed the atmosphere so much that they would not have survived the new environment.

Boris Sauterey was the lead writer of the study, which recently appeared in the publication Nature Astronomy. He is a postdoctoral researcher at Sorbonne University in Paris. Sauterey said that in the time period studied, Mars was thought to contain lots of water and had less severe conditions than today.

But he told The Associated Press the research results present a picture of how things can develop in the universe.

Sauterey said that life on Mars – even simple life like microbes – "might actually commonly cause its own demise." He added that while the findings might seem "a bit gloomy," he also finds them exciting.

The researchers said ancient Mars likely had a wet, warm climate. But this environment would have been threatened by large amounts of hydrogen being removed from the thin, carbon dioxide-rich atmosphere. Temperatures then dropped by about minus 200 degrees Celsius. The researchers said any organisms at or near the surface would likely have buried themselves deeper underground in an attempt to survive.

This is unlike Earth, where microbes may have helped keep climate conditions more moderate. Researchers say this is because Earth had an atmosphere rich in a nitrogen.

Kaveh Pahlevan is a planetary scientist at the SETI Institute, a nonprofit space research center in California. He told the AP he thinks any future models of Mars' climate should consider the new French research.

Pahlevan recently led a separate study suggesting Mars was born wet with warm oceans that lasted millions of years. At the time, the atmosphere would have been dense and mostly hydrogen. But over time, some gases were likely transported higher into the atmosphere and lost to space.

The French study investigated the climate effects of possible microbes when Mars' atmosphere was mostly carbon dioxide. So Pahlevan said the research would not relate to earlier times.

"What their study makes clear, however, is that if (this) life were present on Mars" during this earlier period, "they would have had a major influence on the prevailing climate," Pahlevan said.

The French researchers offered some suggestions about where to look on Mars for signs of past life. They named the Hellas Planitia area, as well as around Jezero Crater. Jezero Crater is where the American space agency NASA's exploring vehicle, Perseverance, is carrying out research activities.

Next, Sauterey said he would like to begin research into the possibility that microbial life could still exist deep within Mars.

post-doctoral –adj. relating to work done after a PhD degree has been completed

demise – n. the end of something

gloomy – adj. unhappy and without hope

prevail – v. to be common among a group of people