Update Required To play the media you will need to either update your browser to a recent version or update your Flash plugin.
By Bryan Lynn
04 December 2022

Quantum computing uses elements of quantum physics to complete operations too complex for traditional computers. Quantum physics is the study of matter and energy at the level of atoms, or smaller.

Researchers recently announced they created two small simulated black holes in a quantum computer and sent an informational message between them. 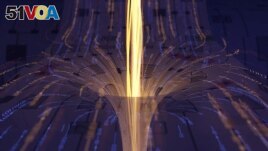 The team said the experiment created a simulated "wormhole." A wormhole is a hypothetical structure of space-time imagined as a passage that connects points separated in space and time.

A wormhole is considered a bridge between two faraway areas in the universe. Scientists describe them as Einstein–Rosen bridges. The two physicists who described them were Albert Einstein and Nathan Rosen. Wormholes fit Einstein's theory of general relativity, which centers on gravity, one of the basic forces in the universe.

The researchers recently reported results of their experiment in a study in the publication Nature.

Maria Spiropulu is a physics professor at the California Institute of Technology. She helped lead the study. She described what the team created as a "baby wormhole."

Spiropulu said in a statement, "We found a quantum system that exhibits key properties of a gravitational wormhole yet is sufficiently small to implement on today's quantum hardware."

She added that even though the experiment was a success, scientists are still a long way from being able to send people or other living things through such a wormhole.

"Experimentally, for me, I will tell you that it's very, very far away," Spiropulu told reporters. "People come to me and they ask me, 'Can you put your dog in the wormhole?'

Joseph Lykken is a physicist at Fermilab, a U.S. government physics laboratory. He was a co-writer of the study. He explained that "there's a difference between something being possible in principle and possible in reality."

But Lykken added: "You have to start somewhere. And I think to me it's just exciting that we're able to get our hands on this at all."

The researchers observed the simulated wormhole on a quantum device at Alphabet-owned Google.

The researchers noted that no actual wormhole was created. They said an actual wormhole would have resulted in "a rupture of space and time." However, they said a simulated wormhole did appear to be created, based on quantum information teleported using the Google computer.

"These ideas have been around for a long time and they're very powerful ideas," Lykken said. "But in the end, we're in experimental science, and we've been struggling now for a very long time to find a way to explore these ideas in the laboratory," he added.

"And that's what's really exciting about this."

hypothetical – adj. the idea that something has been suggested but does not yet really exist or has not been proven to be true

exhibit – v. to show a feeling, quality or ability

in principle – phr. as a general idea or plan

rupture – v. to break or tear something