Scientists Use Satellites to Identify Groundwater Losses in the Middle East

Update Required To play the media you will need to either update your browser to a recent version or update your Flash plugin.
By VOA
15 April, 2013

From VOA Learning English, this is SCIENCE IN THE NEWS. I'm Avi Arditti.

And I'm Faith Lapidus. Today we tell about a study of groundwater losses in the Middle East. We also tell how rising temperatures around the world may influence the intensity of storms. We report on an unusual way to make a microscope. And we tell about a huge, experimental airship.

Researchers have used Earth-orbiting satellites to identify losses of groundwater supplies in the Middle East. The researchers say the losses threaten to incite local water conflicts. And they warn that the situation could worsen as climate change on Earth puts those water resources at risk. 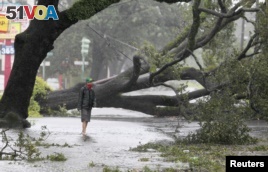 A man stands in front of an uprooted oak tree on Louisiana Avenue as Hurricane Isaac makes land fall in New Orleans, Louisiana August 29, 2012.
Two major rivers, the Tigris and Euphrates, flow through Syria and Iraq on their way to the Persian Gulf. Both rivers begin in southeastern Turkey, which is home to many ethnic Kurds. Some Kurds have pushed for an independent state.

Katalyn Voss is with the University of Colorado. She says Turkey has built more than 20 dams on the rivers in an effort to help economic activity in the country's southeast.

"They have their own political reasons and social reasons for wanting to use as much water as possible."

Water used in Turkey does not always flow to its neighbors. In 2007, farm production fell sharply in Iraq and Syria because of dry weather. However, the drought had less of an effect on Turkish agriculture.

Katalyn Voss and her researcher team say Turkey's dams on the two rivers helped keep farms productive, but at a cost.

"Because they continued to use normal levels, or normal amounts of water during the drought, that resulted in a decline of stream flows into Syria and Iraq. And subsequently, those two countries had to find alternative water sources. And they turned to groundwater."

Information about water use and its availability in the Middle East are rare. So Katalyn Voss and her team turned to space. They studied information from man-made satellites that measure small differences in the pull of Earth's gravity. They found the upper Tigris and Euphrates river basin lost a lot of water between 2003 and 2009. The area lost an estimated 144 cubic kilometers of water, above and below ground, during that period.

Ms. Voss says that is almost equal to all the water in the Dead Sea. She thinks about two-thirds of that water was pumped from underground. She says this is not a good sign for the future, given the predicted effects of climate change.

She says this shows the need for Turkey, Iraq and Syria to agree on how water resources will be used in the future.

Todd Jarvis is head of the Institute for Water and Watersheds at Oregon State University. He says the satellite information needs to be confirmed with on-the-ground measurements. But that will be difficult to do, partly because the countries consider their water information an issue of national security.

Mr. Jarvis says the study is important because it does more than just publicize the problem.

"It also went beyond the step of assessing how much was potentially depleted to going to the next step, and that is, can we use this information to come up with a collaborative approach to managing the resources?"

He says this kind of information from space could provide a tool for policymakers as they look for better ways to share the world's water.

An international team of researchers studied weather records from 1923 to the present. They then created a statistical model based on this information.

The researchers say the model predicted a sharp increase in the number of Katrina-size hurricanes along the eastern coast of the United States. Hurricane Katrina was a Category 5 hurricane. The storm just about flattened the city of New Orleans, Louisiana, in August of 2005.

Tom Knutson works with the National Oceanic and Atmospheric Administration at Princeton University in New Jersey. He is a specialist on extreme climate events. He uses a computer model to study hurricanes. This enables him to test different climactic conditions so that he can predict storm intensity.

"What our model suggests is that (if) you have a global warming due to increased greenhouse gases you have warmer sea surface temperatures. You also have a lot of warming in the atmosphere above the ocean. And these effects operate to gather stronger hurricanes in the warmer climate."

He says his modeling predicts fewer, but more intense hurricanes in the 21st century. He expects a 40 to 80 percent increase in the strongest Atlantic storms.

Tom Knutson says there has been a drop in the number of tropical cyclones in the western Pacific. But the storms that have taken place have brought stronger winds and more rainfall.

The Joint Typhoon Warning Center in Hawaii says there were just 19 named tropical storms in 2010. That is well below the historical average of 31 such storms. That was big news for Tom Knutson.

"Yeah, we were actually a little bit surprised to find this when we studied our climate simulations and even trying to figure out why we're getting this decrease in the models is actually a difficult research problem which we are struggling with".

Yet, even with an increase in the intensity of storm activity worldwide, he says, climatologists still cannot prove that human activity is to blame for the changes.

Microscopes are an important tool in identifying diseases. But they are not always easily available. Now, for a few dollars and a little work, the iPhone can become a microscope.

"We got this idea from reading some of the medical literature. And we saw that some other groups had published neat images that were taken in the laboratory using smartphones and converting them into microscopes. But we thought this was a really neat concept and we wanted to take it to real world and practical settings."

Dr. Bogoch is the lead investigator of a study on the iPhone microscope. It appeared in the American Journal of Tropical Medicine and Hygiene. He says he used an iPhone 4s because he happened to own one.

"But any smartphone with a decent camera and a zoom-in function should work just fine."

Isaac Bogosh and his teammates then bought a ball lens online for about eight dollars. They connected the special lens to the lens of the iPhone camera using two sided tape.

Dr. Bogosh and his colleagues from Massachusetts General Hospital and the Swiss Tropical and Public Health Institute tested the iPhone on Pemba Island in Tanzania. He says they looked for intestinal parasites in school age children. He says the infections affect more than one billion people on the planet.

"We took slides. We were looking for intestinal parasites, so these are stool samples. The slide had a little bit of cellophane covering the stool sample and we put the slide very close to our ball lens, which was stuck up against the iPhone. And we were able to zoom-in and we could see the parasites that we were looking for pretty easily."

Dr. Bogosh said results were better when the infections were more severe. But he thinks that will change when the technology improves.

Intestinal parasites include hookworms and roundworms. They can cause chronic anemia, a lack of enough iron in the blood. They also lead to malnutrition. Normally, intestinal parasites are identified by examining body waste through a traditional light microscope.

Dr. Bogoch says the next step is to improve the image quality. He says the smartphone microscope could greatly extend disease control in poor, rural areas. He says treatment for many intestinal parasites is generally widely available. He also says medical workers would be able to email an image to an expert for help in identification.

Recently, a huge helium-filled airship was shown to reporters in California. The airship is still experimental, but has possible military and other uses. Its developers say a full-sized working model should be finished in a few years.

The experimental airship is just half the size of the final working model. But it is huge -- about 75 meters from end to end. It is wide and flattened on the top, and covered with silver-colored Mylar, a strong, manmade substance.

The airship was built with 35 million dollars from the United States Department of Defense and the American space agency.
The airship is made of carbon fiber and aluminum. It has rotating propellers for take-off and landing, and a ballast system that compresses helium gas to control the lift. Sometimes the airship is heavier than air, sometimes lighter.

Igor Pasternak, an immigrant from Ukraine, created Aeros -- the company that developed the airship. He says the aircraft is not an airplane and not a traditional airship.

"It is really its own category. It is a new type of air vehicle."

He says the airship could reduce shipping costs if it works as planned.

The model airship rises up in the air and falls under its own power. It has been tested inside a hanger near Los Angeles. Company officials say they expect an outdoor test after the airship leaves the storage area sometime this year. If the ship works as planned, and possible users show interest, a commercial version could be produced in two or three years.
Related Articles
go top