Scientists Warn of High Temperatures in the Mediterranean Sea

Update Required To play the media you will need to either update your browser to a recent version or update your Flash plugin.
By Dan Novak
25 August 2022


Climate scientists are warning of serious problems for life in the Mediterranean Sea because of high temperatures during the summer.

The scientists say they are seeing high water temperatures across the sea from Barcelona in Spain to Tel Aviv in Israel. 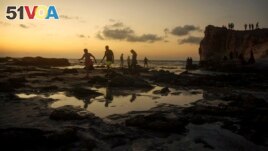 Extreme heat in Europe and other countries around the Mediterranean has gotten a lot of attention this summer. But rising sea temperatures have received less attention.

Marine heat waves are caused by ocean currents building up areas of warm water. Weather systems and heat in the atmosphere can also add warmth to the water's temperature. And just like heat waves on land, marine heat waves are longer, happen more often and are more intense because of climate change.

The situation is "very worrying," says Joaquim Garrabou. He is a researcher at the Institute of Marine Sciences in Barcelona. "We are pushing the system too far. We have to take action on the climate issues as soon as possible."

Garrabou is part of a team that recently published a report on heat waves in the Mediterranean Sea between 2015 and 2019. The report says the heat waves have led to deaths of a large number of marine species.

The study found about 50 species, including corals, sponges and seaweed, were affected along thousands of kilometers of Mediterranean coasts. The study was published in Global Change Biology.

The situation in the eastern Mediterranean is especially notable. The waters off Israel, Cyprus, Lebanon and Syria are "the hottest hot spot in the Mediterranean, for sure," said Gil Rilov. He is a marine scientist at Israel's Oceanographic and Limnological Research Institute, and one of the writers of the study. Sea temperatures in the summer are now regularly above 31 degrees Celsius.

These warming seas are driving native species to the edge of survival. Every summer their desired temperature is being exceeded, he said.

Scientists expect to see species loss further west in the Mediterranean Sea toward Greece, Italy and Spain in the coming years.

Garrabou said seas have been absorbing 90 percent of the Earth's extra heat. They also absorb 30 percent of carbon dioxide released into the atmosphere by coal, oil and gas production. This is called the carbon-sink effect. Scientists say oceans protect the planet from more intense climate effects.

Ocean scientists want officials to protect at least 30 percent of sea areas from human activities like fishing. About 8 percent of the Mediterranean Sea area is currently protected.

Recent scientific studies say that surface temperatures on the Mediterranean have increased by 0.4 degrees Celsius every 10 years between 1982 and 2018. Yearly, it has been rising by 0.05 degrees Celsius over the past 10 years. Some scientists say even very small increases in average temperatures can have serious effects on ocean health.

"The question is not about the survival of nature, because biodiversity will find ways to (survive) on the planet," Garrabou said. "The question is if we keep going in this direction maybe our society, humans, will not have a place to live."

marine –adj. related to or having to do with the sea or ocean

species — n. a group of animals or plants that can produce offspring

exceed — v. to become greater or larger than something

absorb — v. to take something in in a slow or natural way

biodiversity — n. the existence of many different kinds of living things in an environment