Scorsese Gets Playful with Dylan in 'Rolling Thunder Revue' Film

Update Required To play the media you will need to either update your browser to a recent version or update your Flash plugin.
By Susan Shand
14 June, 2019


Film director Martin Scorsese has made his second film about singer -- and winner of the Nobel Prize for Literature -- Bob Dylan. The film mixes fact and imaginative fiction.

Rolling Thunder Revue: A Bob Dylan Story will be released on Netflix and in limited movie theaters on Wednesday.

It shows one of the singer's strangest musical tours - his 1975 trip around the United States. That tour had the playfulness of old vaudeville performances and much of it was captured on film.

The Rolling Thunder tour included singers Joni Mitchell, Joan Baez and Roger McGuinn as well as the poet Allen Ginsberg. Rock and roll singer Mick Ronson also joined the group. They played in small theaters without much publicity, although Dylan was a major star at the time. 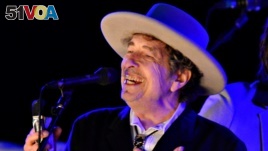 "It wasn't a success, not if you measure success in terms of profit. But it was an adventure," Dylan says in Scorsese's film.

Dylan shaped some of what cameramen shot in the 1978 film Renaldo and Clara. Critics and audiences hated it. Dylan never again tried to direct a film.

Scorsese's movie is taken from over 100 hours of film footage shot in 1975. It has commentary from Dylan and Baez, with interviews with Sharon Stone and other actors who tell untrue stories about their supposed involvement with the tour.

"We are not calling it a documentary," said Margaret Bodde. She is one of the producers.

Scorsese used a different method in his earlier movie about Dylan. No Direction Home from 2005 was a traditional documentary about the singer's early life. In the 1960s, Dylan changed from someone who left college to sing folk music to an international rock star.

The new film shows Dylan in 1975 performing songs such as Mr. Tambourine Man and Knockin' on Heaven's Door in white face paint.

"There's just a certain kind of connection to the audience that he seemed to have on this tour that I think will blow everyone's minds," Bodde said.

The movie's fictional stories "really grew out of the spirit of the tour," she said. "Because Bob looks so different on that tour and he's kind of an actor."

One of the fictional people in the film is an unpleasant Dutch filmmaker who is trying to film the whole trip. He is played by Bette Midler's husband, Martin von Haselberg.

In a false interview, the Dutchman is angry that Dylan never answers his questions with real answers.

Scorsese did not use the film that Dylan used in his movie Renaldo and Clara.

"The tour itself -- not that movie -- that's what we were interested in," said David Tedeschi. He is one of the editors on the Scorsese film.

In one part, Dylan and Baez meet at a bar. Baez is wearing a wedding dress. The two former lovers talk about why they each married someone else.

fiction – n. something that is not true

tour – n. a journey through the different parts of a country, region,

vaudeville – n. a type of entertainment that was popular in the U.S. in the late 19th and early 20th centuries and that had many different performers doing songs, dances, and comic acts

audience – n. the people who attend a performance

folk music - n. the traditional music of the people in a country or region