Scotland's Independence Vote Is Too Close to Call

Update Required To play the media you will need to either update your browser to a recent version or update your Flash plugin.
By Mario Ritter
14 September, 2014


The people of Scotland will vote Sept. 18 on whether to stay in the United Kingdom with England, Wales and Northern Ireland, or whether to be an independent country.

Recent public opinion studies suggest that sides for and against independence have almost equal support.

Scotland has been hosting political leaders from London who are urging the area not to vote for independence from Britain.

"Of course it is an issue that will be decided solely by the people of Scotland, but I want to make sure that they hear how much the rest of the United Kingdom also cares and wants to say to them very clearly: ‘It's your decision, but we want you to stay.' "

The push for the vote on independence started two years ago when Prime Minster Cameron agreed to the referendum, or vote. Scotland has its own parliament. But its powers to tax are limited. And, Britain decides economic and foreign policy. 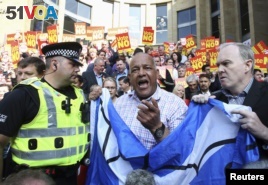 Supporters of the "Yes" campaign are confronted by a police officer as they try to disrupt a "No" campaign rally. The leader of the Labour party Ed Miliband was to address in Glasgow, Scotland on Sept. 11, 2014 The "yes"-to-independence campaign appears to have gained support as the vote nears. The ruling Scottish National Party leads the campaign.

David Torrance is a political writer. He says a minority of Scots has always supported independence. Now, however, he says there is also a new group of people who believe independence will open greater opportunities, or chances.

"What you see now is an additional layer of people who have been convinced over the past two years that independence will make them better off."

Past Referendums: a Record of Success and Failure

Ethnic differences and economic disputes are often at the heart of the desire for self-determination, the desire for self-government. The most recent internationally recognized referendum resulting in a new country was in 2011. That year, South Sudan voted to leave Sudan after years of conflict. Montenegro used a referendum to break away from Serbia in 2006. And a U.N. organized referendum in East Timor resulted in independence from Indonesia.

Many referendums, however, result in a vote to remain part of the larger country. That has happened in Puerto Rico, a territory of the U.S., and in Quebec, in Canada.

In some cases, referendums do not solve territorial disputes, as is the case in Crimea. Russia faces growing restrictions and international condemnation for its annexation of Crimea after a rushed referendum in March.

Referendums can also be an effort for a territory to secure greater rights.

In this case, the main question is whether Scotland would be better off economically if it breaks away from Britain.

The North Sea area near Scotland is rich in oil. The Scottish port of Aberdeen is a center for services provided to oil drilling platforms in the North Sea. An estimated 90 percent of Britain's oil supplies are beneath the sea, in what would be Scottish territorial waters.

Andrew McKenzie Smith lives near Dundee, Scotland. He is an activist for a vote against independence. He argues that it is too risky because of the economic uncertainties.

"I just feel we're going into something, absolutely into an abyss of the unknown—that the ‘Yes' campaign have got lots of sound bites, there's lots of exciting things that they propose, but in the harsh reality, none of it is accounted for." 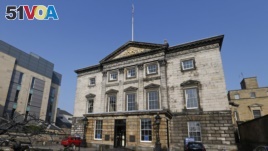 The head office of the Royal Bank of Scotland (RBS) in Edinburgh, Scotland

Two of Britain's biggest banks, the Royal Bank of Scotland and Lloyds Banking Group, have said they will move their headquarters if Scotland becomes independent. The financial services industry is a major part of the Scottish economy and provides many jobs. While the banks would keep many operations in Scotland, the move would be important.

Political experts say public opinion studies showing increasing support for independence have sent shock waves across Britain. Scotland and Britain have been unified for more than 300 years. The vote on September 18th will decide whether Scotland will remain part of the United Kingdom.

Henry Ridgewell reported this story from Edinburgh. Mario Ritter wrote it for Learning English. Jeri Watson was our editor.

And now for Words in this Story

equal adj., the same in amount, size, weight or value; having the same rights

referendum n., an event in which the people of a country, state, or area, vote on an issue; a public vote on a particular issue

result n., that which follows or is produced by a cause

risky adj., having the chance of loss, damage or injury

annexation, n., to incorporate (a country or other territory) within the domain of a state