Update Required To play the media you will need to either update your browser to a recent version or update your Flash plugin.
By Bruce Alpert
13 March, 2017


Scottish First Minister Nicola Sturgeon wants Scotland to get a second vote on independence from Britain.

Her reason: Britain is forcing Scotland out of the European Union against its will.

"It has implications for our economy; for job opportunities, public spending and living standards -- and for our ability to protect and advance our vital day-to-day- priorities in education, health and business," she said.

Last June, British voters decided to leave the European Union. The vote was 51.9 percent in favor and 48.1 percent opposed.

But more than 60 percent of Scottish voters wanted to remain in the EU.

British Prime Minister Theresa May said a second Scottish independence vote would be disruptive. She also said most Scottish voters oppose a second vote on independence.

"Instead of playing politics with the future of our country, the Scottish government should focus on delivering good government and public services for the people of Scotland," May said. "Politics is not a game." 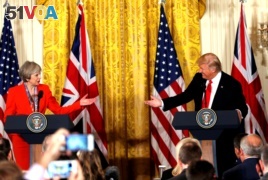 Sturgeon said the British government is blocking her efforts to allow Scotland to negotiate its own access to European Union markets. She added compromise with Britain is still possible, but doubtful.

"At times like these, it is more important than ever to have a clear plan for the way ahead -- to try, as far as is possible, to be in control of events and not just at the mercy of them," Sturgeon said.

Sturgeon said she would ask the Scottish Parliament next week to start the process for an independence vote. She said it would be held in the fall of 2018 or the spring of 2019.

But a vote is not guaranteed.

Sturgeon will need approval from the British Parliament, where May's conservative party holds a majority. This comes just as May was preparing to start the formal process for Britain to leave the EU.

The Associated Press and Reuters reported on this story. Bruce Alpert adapted the story for Learning English. Hai Do was the editor.

standard - n. a level of quality or achievement that is considered acceptable or desirable

disruptive - adj. to interrupt the normal progress or activity of something

mercy - n. in a position or situation in which you can be harmed by someone or something you cannot control