Update Required To play the media you will need to either update your browser to a recent version or update your Flash plugin.
By Caty Weaver
17 January, 2016


There has been praise and condemnation for Hollywood star Sean Penn this week.

Sean Penn has had controversial moments throughout his public life. 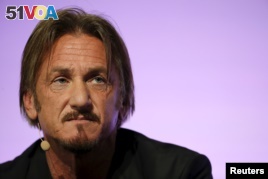 But this week, the public learned that Penn met with the leader of a brutal Mexican crime group. The Sinaloa group is known for especially vicious killings, torture and drug dealing.

The actor interviewed Joaquin "El Chapo" Guzman in October 2015. Guzman had escaped from a Mexican federal prison in July. It was his second escape. He was on the lam from 2001 to 2014 after the first prison break. He was serving a 20-year sentence for murder and drug trafficking.

In his article, Penn explained why he wanted to meet the crime leader. The actor wrote that he wanted to "explore what may be inconsistent" with the American government and media's descriptions.

Penn is a longtime political activist. He has involved himself in international affairs at high levels. In 2007, he met and befriended Hugo Chavez, who was then the socialist president of Venezuela. 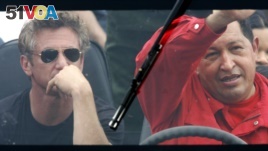 The U.S. government was not a fan of Chavez, who allied himself with Cuban leaders Fidel and Raul Castro. When Chavez died in 2013, Penn said the U.S. "lost a friend that it never knew it had."

Penn also has met with Raul Castro. And he got involved in the Falklands dispute between Britain and Argentina. The actor met with Argentinian President Cristina Fernandez de Kirchner in 2012, after Britain made military moves toward Argentina.

Penn sided with Argentina in that dispute. He said the world would not accept "archaic colonialist ideology."

Penn has written about his experiences for the news media before. He visited Iraq in 2004, and Iran the following year. He wrote about those experiences for the San Francisco Chronicle. Penn had been to Iraq earlier to protest international military strikes against the country. 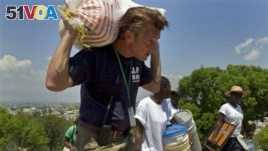 The star also helped in times of natural disaster. He started a foundation to help victims of the earthquake in Haiti. He also went to New Orleans shortly after Hurricane Katrina and reportedly rescued some survivors.

And in 2012, Sean Penn went to Bolivia to visit a U.S. businessman jailed there. Jacob Ostreicher had been jailed for months and never charged with a crime. Penn promised to work for his release. A year later, Ostreicher was out of jail in the care of Penn. He has publicly thanked Penn for his efforts.

Penn's interaction with Joaquin Guzman, the drug kingpin, was set up by another actor. Kate del Castillo has expressed support for the crime group leader for several years. She said she believes the Mexican government is the more corrupt of the two.

Guzman and Castillo exchanged a series of texts. She suggested that the criminal meet with Sean Penn. Reports now suggest that Guzman had never heard of Penn. His interest in meeting del Castillo was apparently stronger.

Penn said in his Rolling Stone report that he wanted to see the other side of the drug war. He has said that professional journalists are too focused on talking to different sides in an issue.

Perhaps this is why Sean Penn did not ask Guzman about the hundreds of reporters killed in Mexico to protect organized crime. Among the many media professionals angered by Penn, Mexican reporters are especially upset. 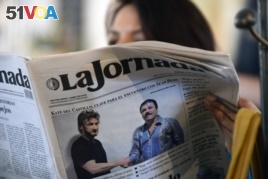 Journalist Leon Krause wrote about the actor's article in El Universal newspaper. He described it as "perfect act of propaganda" for Guzman. He wrote that Penn's version of Guzman "is almost likeable if it wasn't for (his cartel's) 10,000 murders."

Other reporters criticized Penn and Rolling Stone for sending the piece to Guzman for approval before publication.

Sean Penn dismisses the journalistic objections to his story. He says the press is simply jealous that he was able to get to Guzman. But Penn also says his interview and article were a failure.

He told television host Charlie Rose that he had hoped the story would start an honest and critical conversation about the drug war. But he said, "I have a regret that the entire discussion about this article ignores (that) purpose..."

Officials in Mexico have said that Sean Penn's interview helped them find and capture Guzman. Penn denies this and says he does not fear the Sinaloa crime group.

Caty Weaver wrote this story for Learning English. Kathleen Struck was the editor.

Do you consider Sean Penn a journalist? Do you respect his work in the field? Write to us in the comments section or on 51VOA.COM.

interview - v. to question or talk with (someone) in order to get information or learn about that person

inconsistent - adj. not in agreement with something

ideology - n. the set of ideas and beliefs of a group or political party

kingpin - n. a person who controls an organization or activity

conversation - n. an informal talk involving two people or a small group of people: the act of talking in an informal way