Update Required To play the media you will need to either update your browser to a recent version or update your Flash plugin.
By Bryan Lynn
15 June 2020


Scientists say they are carrying out tests on monkeys, ferrets and other animals in the search for a vaccine for COVID-19.

The testing can help researchers learn about how the vaccine affects the immune system, the body's natural defense against disease. If a vaccine causes the immune system to react in the wrong way, it could worsen existing disease.

Researchers have already been seeking tens of thousands of human subjects to take part in large COVID-19 vaccine studies. Efforts to find a vaccine to prevent COVID-19 have quickly increased as the disease continues spreading in a worldwide pandemic.

Scientists have also turned to animals to help answer important questions about the development of a vaccine.

Ralph Baric is a coronavirus expert at the University of North Carolina, Chapel Hill. His laboratory is testing several possible vaccines in animals. 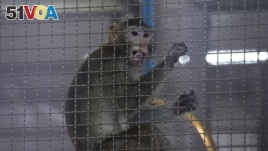 A long-tailed macaque which is kept for use in clinical research is seen inside cage at National Primate Research Center, run by Chulalongkorn University in Saraburi Province, north of Bangkok, Saturday, May 23, 2020.

Animal testing lets scientists see how the body reacts to vaccines in ways studies involving people never can, said Kate Broderick, chief of research at U.S.-based Inovio Pharmaceuticals. With animals, "we're able to perform autopsies and look specifically at their lung tissue and get a really deep dive in looking at how their lungs have reacted," Broderick told The Associated Press.

Broderick has been awaiting results from mice, ferrets and monkeys that were given the virus after receiving Inovio's vaccine. Three species were chosen to expand research results.

Some progress has been reported involving vaccine safety. The first animal data from several research teams has found no signs of a worrisome side effect called disease enhancement.

Disease enhancement happens when a vaccine causes a body to produce antibodies that cannot fully block infection. The weak antibodies instead help strengthen the disease.

The first case of this happened in the 1960s, with a failed vaccine for respiratory syncytial virus, or RSV. More recently, it has led to difficulties in vaccine development efforts for dengue. And some attempted vaccines for SARS, which is similar to COVID-19, caused disease enhancement in animal testing.

The three studies were small, but none of the monkeys showed evidence of immune-enhanced disease when the scientists put the virus directly into their bodies.

Some of the best evidence yet that a vaccine might work comes from the monkey studies, in which Oxford and Sinovac created very different kinds of COVID-19 vaccines. In separate studies, each team reported vaccinated monkeys were protected from the dangerous lung condition pneumonia. The researchers said the untreated monkeys in the studies got sick.

But protection against severe disease is just a first step. Could a vaccine also stop the spread of the virus? The Oxford study raises some questions about that issue. The researchers found just as much virus remained in the vaccinated monkeys' noses as in the unvaccinated.

The kind of vaccine may make a difference. Researchers at Beth Israel Deaconess Medical Center in Boston designed six versions of a COVID-19 vaccine. Some only partly protected monkeys - but one fully protected eight monkeys from any sign of the virus.

Those results were reported by Dr. Dan Barouch, who is working with America's Johnson & Johnson company on developing a COVID-19 vaccine.

pandemic – n. a contagious disease that crosses into many countries

autopsy – n. a medical examination of a dead body to discover the exact cause of death

specifically – adv. in a way that is exact and clear

enhancement – n. an improvement of something