Update Required To play the media you will need to either update your browser to a recent version or update your Flash plugin.
By John Russell
16 August 2021


Under Haiti's burning heat, Jennie Auguste lay on a thin foam bed placed on the ground near an airport. Auguste had wounds on the chest, stomach and arm after the roof of the store she worked at collapsed during a powerful earthquake on Saturday.

Her eyes looked lost. But at times she showed signs of pain as her sister and others tried to keep her cool. She lives in Les Cayes, a badly damaged coastal town in the southwestern part of the country. Its health care centers are full. So, Auguste could only wait for space at a local hospital or a spot on one of the small planes taking injured people to Haiti's capital, Port-au-Prince.

"There has been nothing. No help, nothing from the government," Auguste's sister, Bertrande, said Saturday. 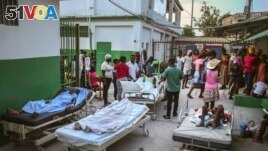 People injured during the earthquake are treated in the hospital in Les Cayes, Haiti, Sunday, Aug. 15, 2021.

Number of dead and injured increasing

The number of dead from the magnitude 7.2 earthquake continues to rise sharply.

By Sunday, the country's Civil Protection Agency had counted 1,297 dead from the earthquake. The earthquake was more powerful than the 2010 quake that struck close to the capital, Port-au-Prince. It also left at least 5,700 people injured.

The civil protection agency said 13,694 houses were damaged, suggesting the number of people killed or injured could rise in the coming days.

The quake centered about 125 kilometers west of the capital. It nearly flattened some towns and caused landslides. Blocked roads made rescue efforts more difficult.

Haiti is the poorest country in the Western Hemisphere. It was already struggling with worsening poverty, the coronavirus crisis and political tensions following the assassination of President Jovenel Moise. A wave of gang violence had also struck the area near the center of the earthquake.

The United Nations Office for the Coordination of Humanitarian Affairs reported that local officials had to negotiate with gangs in the seaside area of Martissant to permit two humanitarian groups to pass through the area each day. The agency said gangs have repeatedly attacked humanitarian workers in the southern area of Haiti. They added that the area was almost "unreachable" over the past two months because of roadblocks and security concerns.

In a video published on social media, one gang leader said the armed groups had declared a truce, or a temporary stop to fighting, along the road to Les Cayes.

The United Nations called for a "humanitarian corridor" to be established so that aid could pass through gang-held territories.

Agency spokeswoman Anna Jefferys said the first convoy passed through Sunday with government and U.N. workers. She added that the U.N.'s World Food Program plans to send in food supplies on Tuesday.

Haitiian Prime Minister Ariel Henry flew to visit Les Cayes. He declared a one-month state of emergency for the whole country. He said that first aid convoys organized by the government had started moving help to the affected areas.

Fore said that, 11 years after the huge 2010 quake, "Haiti is reeling once again." She noted that this disaster happened at the same time as "political instability, rising gang violence, ... malnutrition among children, and the COVID-19 pandemic."

Haiti has received just 500,000 vaccine doses. That is far fewer than the country needs.

Medical workers from across the area were working to help as hospitals in Les Cayes started running out of space to perform surgeries. Haiti's government urged aid organizations to work through the planning ministry. This move may help to avoid the mistakes made following the 2010 earthquake that killed tens of thousands of people.

USAID Administrator Samantha Power is overseeing the U.S effort to help Haiti. She said Sunday that USAID was sending a search-and-rescue team from Virginia at the request of Haiti's government. The 65-person team will bring specialized tools and medical supplies, Power wrote on Twitter.

Nearby countries, including the Dominican Republic and Mexico, hurried to send food and medicines. Colombia sent search and rescue groups. And Cuba sent members of a medical team.

The rescue and aid efforts will be harder because of Tropical Depression Grace, which is expected to bring heavy rainfall on Monday. The rain may cause landslides and flooding, Haiti's Civil Protection Agency said.

Thousands of people sleeping in the streets would be unprotected from the heavy rains. The head of the agency added there would be an increased risk of water-borne diseases.

Mark Stevenson and Evens Sanon reported on this story for the Associated Press and Laura Gottesdiener reported on it for Reuters. Jill Robbins adapted it for Learning English. Ashley Thompson was the editor.

roof – n. the cover or top of a building or vehicle

convoy – n. a group of vehicles or ships that are traveling together usually for protection

humanitarian corridor – n. a safe route via which endangered civilians are provided with aid and/or are evacuated.

reel – v. to be very shocked, confused, and upset

dose - n. the amount of a medicine, drug, or vitamin that is taken at one time

What do you think of the response to the earthquake in Haiti? Have you experienced an earthquake yourself? We want to hear from you. Write to us in the Comments Section.