Searching for Clues on Climate Change in Antarctica

Update Required To play the media you will need to either update your browser to a recent version or update your Flash plugin.
By Susan Shand
24 February, 2019


Scientists on an island just north of Antarctica are studying the ice for clues about everything from climate change to cures for cancer.

Chile operates a research base on King George Island in the Southern Ocean. The island lies about 120 kilometers from the coast of Antarctica.

The Escudero base acts as a research center for an area that extends to the South Pole. More than 300 international scientists are based there. They take turns working on experiments and collecting information in the bitter cold.

The Chilean Antarctic Institute (INACH) has supported research into a biomolecule called "Antartina," which comes from a plant native to the area. In early tests, the biomolecule has been shown to shrink several kinds of cancer in mice. 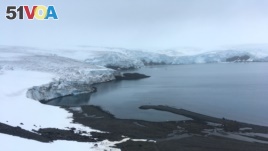 The Collins glacier on King George Island has retreated in the last 10 years and shows signs of fragility, in the Antarctic, Feb. 2, 2018.

Scientists working at Escudero also look at plants that could treat Alzheimer's disease, enzymes to remove sugar from milk and others to improve lettuce crops.

This month, a group of scientists left on a research trip to investigate what causes the break-up of ice shelves. Other studies have linked the break-up with climate change.

In 2017, an iceberg the size of Trinidad and Tobago broke off a shelf in Antarctica. It led to widespread concern, fears of possible shipping accidents and a rise in sea levels.

"There are different theories related to changes in sea temperatures eating the platforms," said Shelley MacDonell, a glaciologist from New Zealand.

MacDonell spoke to the Reuters news agency as she prepared to travel to one of the icebergs affected. She and her team want to be able to predict when and where in the future ice shelves might break off.

The scientists hope their research will help the mapping of the shape of the world's southernmost continent in the years to come. They also want to help island and coastal nations plan for rising sea levels.

Ice shelves act as walls that hold back Antarctic ice, stopping it from spilling more quickly into the ocean. Icebergs have historically broken off for centuries, but the number of break-ups has risen in recent years.

Large platforms "have collapsed in the past. What is not known is if the collapses were gradual," MacDonell said. She added that the collapses that are happening now appear to move very quickly.

The Antarctic Peninsula is the northernmost part of the continent. It is also one of the areas most affected by melting ice. Scientists believe that is because it had more contact with the ocean.

"We have a long-term trend that is pointing to this process of warming and collapse of these platforms," said Chilean glaciologist Francisco Fernandoy. He is a member of MacDonell's team.

The Netherlands and several island territories are waiting for the results of the study. If the ice caps of Greenland and Antarctic were to melt completely, there would be a 10-meter rise in sea levels. The water would cover those places, according to INACH research.

MacDonell and her team are traveling to a camp on the Müller ice shelf. At the end of last year, the ice shelf lost a 1.6-kilometer long iceberg.

The scientists will spend two weeks in very cold conditions to gather scientific samples. The team will use radar waves to take measurements of the icebergs and remove ice from the inside. This ice will enable the researchers to effectively look back in time.

The ice will be moved to laboratories in central Chile for examination. They will be kept in rooms with a temperature of 20 degrees below zero Celsius.

iceberg - n. a very large piece of ice floating in the ocean

platform - n. a flat surface that is raised higher than the floor or ground

trend - n. a way of behaving, proceeding, etc., that is developing and becoming more common

according - v. as stated, reported, or recorded by

sample - n. a small amount of something that gives you information about the thing it was taken from