Update Required To play the media you will need to either update your browser to a recent version or update your Flash plugin.
By Dr. Jill Robbins
28 January, 2016

A public health official said Sunday that a 71-year-old man from Oman came to a hospital in Bangkok Friday. He had a high body temperature and a cough. He received some treatment in his home country that did not help. Like other travelers from the Middle East, he decided to go to Thailand to get medical care.

The man is now at Bamrasnaradura Infectious Diseases Institute, near Bangkok. Tests there showed he has the MERS virus. 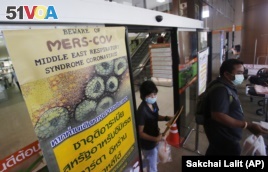 A sign raising awareness for the MERS virus is posted on a door at the building where a 75-year-old man is being quarantined for MERS (Middle East Respiratory Syndrome) along with three family members at the Bamrasnaradura Infectious Diseases Institute in Nonthaburi, Thailand, Friday, June 19, 2015. Thailand confirmed on Thursday its first known case of the deadly MERS virus, after killing a number of people in South Korea over recent weeks. Writing in Thai says, "If you have traveled from Saudi Arabia, United Arab Emirates, Qatar, Iran, or South Korea and have respiratory trouble please seek attention." (AP Photo/Sakchai Lalit)

Officials are closely watching 37 people who came in contact with the man. They include family members who traveled with him, a taxi driver, passengers who sat near him, flight attendants and hospital workers. These people are in quarantine to prevent them from passing the disease to others.

The first case of MERS in Thailand was reported in June 2015. That case was also a man from Oman. He survived the disease. Because of the earlier MERS case, the Thai health ministry says it has improved its methods of finding the virus, monitoring and treating patients.

MERS is the same type of virus as the common cold. It is caused by a coronavirus. MERS is similar to Severe Acute Respiratory Syndrome, or SARS, another coronavirus.

MERS kills more than 30 percent of the people who are infected with the virus. The main cause of death is respiratory infections. People with MERS have a fever, cough and difficulty breathing. There is no vaccine, but the U.S. Centers for Disease Control says that the National Institutes of Health is looking into developing one.

The Mayo Clinic says treatment includes rest, fluids, pain relievers and oxygen therapy. MERS does not spread easily. It usually only affects people who are in close contact with an infected person.

The first case of MERS in humans was found in Saudi Arabia in 2012. Most of the cases have been in the Middle East.

Dr. Jill Robbins wrote this story for Learning English based on reports from Reuters and the Wall Street Journal. Ashley Thompson was the editor.

Now it's your turn. Have you heard of MERS? What do you think of traveling to get medical treatment? Write to us in the Comments section or on 51voa.com.

cough - n. expelling air from the lungs suddenly with an explosive noise

quarantine – n. the situation of being kept away from others to prevent a disease from spreading

fever – n. a body temperature that is higher than normal (98.5 degrees Fahrenheit or 37 degrees Celsius)