Update Required To play the media you will need to either update your browser to a recent version or update your Flash plugin.
By Mario Ritter
27 October, 2017


The National Archives in Washington has released more than 2,800 secret files related to the killing of President John F. Kennedy.

The release late Thursday of the Kennedy files was required by a 1992 law.

However, President Donald Trump ordered that more than 200 of the files should temporarily remain secret until a review is completed.

Some people had questioned whether Trump would permit the release of the documents. On Wednesday, he tweeted:

"The Long anticipated release of the #JFKFiles will take place tomorrow. So interesting!"

But on Thursday, Trump said he had no choice but to accept recommendations to withhold some of the files.

A Trump administration official said most of the recommendations had come from the Federal Bureau of Investigation and the Central Intelligence Agency, or CIA. 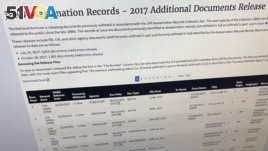 Part of a web page showing the page from the National Archives showing a listing of records released on Thursday, October 26, 2017. More than 200 files have been temporarily withheld.

Officials said Trump had given the agencies 180 days to explain why the remaining files should not be released.

Larry Sabato at the University of Virginia is a historian and expert on Kennedy. Sabato said he was told that there was pressure on Trump to withhold some documents. He said documents generated in the 1990s could contain names of people who are still alive and these were of concern to some people.

President John F. Kennedy was shot and killed while riding in an open car through Dallas, Texas on November 22, 1963. He died hours later.

The killing of JFK, as Kennedy is often called, has probably led to more questions and doubts than any other political killing in American history.

The details of the event have led to countless theories that there was a conspiracy. Books, documentaries and at least one movie by director Oliver Stone "JFK," have put forward theories about who killed Kennedy and why.

Secret Service Agent Clint Hill was near the president on that day in November. He spoke about what he heard.

"I thought it must have been a fatal wound, but I did not know for sure. But the only thing Mrs. Kennedy said was, ‘Oh Jack, Oh Jack what have they done?' And then she said, ‘Jack I love you.'" Lee Harvey Oswald, accused assassin of President John F. Kennedy, is placed on a stretcher after being shot in the stomach in Dallas, Texas, November 24, 1963.

Soon after the shooting, Lee Harvey Oswald was charged with the killing. But he denied involvement.

"Did you shoot the president?"

Oswald, however, was shot and killed by nightclub owner Jack Ruby before a trial could take place.

Lyndon Johnson was sworn in as president immediately after Kennedy's death. Johnson soon established a commission to investigate the killing. The commission was chaired by then-Chief Justice Earl Warren. It became known as the Warren Commission.

In 1964, the commission completed its report which said that Oswald had acted alone. The commission also tried to discredit what it called "myths" that were already spreading related to the assassination.

But details about Oswald's travels before 1963 led many to believe others were involved. And they lead to a new term describing popular beliefs and ideas about events that are hard to understand: conspiracy theories.

Among the details that have fueled conspiracy theories is the killing of Oswald, the main suspect. Another links Oswald with Cuban officials in Mexico City before the shooting.

During Kennedy's time in office, the failed effort to overthrow the Cuban government had caused bad relations with the U.S. to worsen. Then, the Cuban Missile Crisis pushed the U.S., Cuba and the Soviet Union close to war in 1962. Some people believed that Cuba's leader at the time, Fidel Castro, was involved in Kennedy's death.

Oswald also was said to have spent years in the Soviet Union and then returned to the U.S. in 1962.

For more than 50 years, these details and many others have kept people's attention and fueled more theories.

Not likely to be shocking

Gerald Posner is the author of a 1993 book on the killing "Case Closed." He says the release of the documents could be embarrassing to people who are still alive. But, he has said he does not think there will be anything shocking in them.

But Sabato says the release could help history students understand the events of that time better. He said finally, "researchers will have all the information that the government has had and be able to reevaluate the Kennedy assassination."

The shooting is still in the living memory of millions of people. Census Bureau numbers show that about 49 million Americans were old enough to remember the event in Dallas.

Some still have strong feelings about that time. "The proportion of Americans believing in a conspiracy has ranged from 60 percent to 75 percent," said Sabato.

Although many questions have been raised, no clear evidence has been found to show that Oswald did not act alone. Now, there are millions of additional pages for students to study.

Pete Heinlein, Jim Malone and Imam Sultan reported this story for VOA News. Mario Ritter adapted it for VOA Learning English with additional materials from AP and Reuters. Hai Do was the editor.

files –n. one or more related documents kept together

conspiracy –n. a plot by at least two people to carry out something

assassination –n. the killing of a public official or someone famous

conspiracy theories –n. theories about how well-known people are involved in bad or worrying events

embarrassing –adj. related to something that causes shame or discomfort

redact –v. to delete parts of some written document

proportion –n. the amount of something in relation to something else