Update Required To play the media you will need to either update your browser to a recent version or update your Flash plugin.
By Andrew Smith
16 December 2022


The capital city of Washington, D.C. is home to many famous museums in the United States. But there is one museum in the city that visitors will never get to see: the U.S. Secret Service Museum.

Placed inside the agency's headquarters, the one-room museum shows objects from the agency's history. It also honors the 40 men and women of the service who have died while performing their duty.

Mike Sampson is a historian and archivist at the U.S. Secret Service. He said the museum is only open to agency workers, their families, and some special guests. He added that concerns about security and lack of resources are the reasons the museum is closed to other visitors. 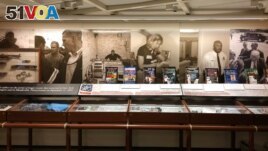 The Secret Service is probably best known for protecting U.S. presidents. But its first mission was to fight financial crime.

Jason Kendrick is another historian and archivist at the U.S. Secret Service. He said that on April 14, 1865, the treasury secretary at the time, Hugh McCulloch, suggested to U.S. President Abraham Lincoln to create an agency to fight counterfeit, or fake money.

"At the time, one-third of all the currency in the U.S. during and post-Civil War was counterfeit," said Kendrick. So, on the same day that Lincoln approved the creation of the Secret Service, he was killed a few hours later at Ford's Theatre in Washington, D.C.

It was not until 1901, after the assassination of President William McKinley, that the Secret Service added the job of protecting the president. But the service's work had expanded before then to fighting other kinds of crime. One reason is that other agencies, such as the Federal Bureau of Investigation and the Central Intelligence Agency, did not yet exist.

The Secret Service fought against activities such as illegal trade, crimes relating to land ownership, and spying. Kendrick explained that beginning in 1868, the Secret Service was permitted to fight any crime against the federal government.

Some exhibits in the museum show examples of counterfeiting. Others show the dangers of presidential life, such as the gun used during the 1975 assassination attempt on President Gerald Ford in San Francisco, California.

Working those duties sometimes comes at a price for Secret Service members.

On display at the museum are objects from terrorist attacks in which Secret Service members were killed. These include the bombing of a government building on April 19, 1995, in Oklahoma City, Oklahoma, and the September 11, 2001, attack on the World Trade Center in New York City. Sampson says this part of the museum is a way to respectfully honor those Service members.

The museum, Sampson said, "gives us an opportunity to reflect on the history of our agency, and also to show what we're doing these days."

museum -n. a building where objects of historical, artistic, or interesting value are kept and displayed

archivist -n. a person whose job it is to collect, organize, and take care of historical objects and records

assassination -n. the murder of an individual, usually political, by surprise attack

opportunity -n. an occasion or possibility for doing something

reflect on -v. to think deeply about something