Kenyans Are Concerned about Security, Corruption

Update Required To play the media you will need to either update your browser to a recent version or update your Flash plugin.
By George Grow
10 April, 2015


This week, Kenyan President Uhuru Kenyatta marked two years in office. The anniversary was observed as Kenyans mourned the victims of a terror attack in the town of Garissa. Gunmen killed more than 140 people at Garissa University College. Medical workers have still not identified the bodies of all of those who were killed.

There are reports that more than 160 students are still missing.

The Somali militant group al-Shabab has claimed responsibility for the attack. In September 2013, al-Shabab gunmen attacked the Westgate shopping center in Nairobi. At least 67 people were killed.

There has been a lot of talk about Kenya's security, and corruption cases linked to government officials. President Kenyatta has taken a strong position against corruption. He has urged all government officials and individuals suspected in possible wrongdoing to step aside while investigations take place. At least four ministers have already done so. 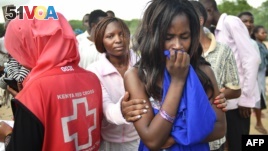 Students evacuated from Moi University during a terrorist seige react as they gather together in Garissa, Kenya, before being transported to their home regions, April 3, 2015. (AFP PHOTO / CARL DE SOUZA)

Barrack Muluka is a political commentator. He believes Mr. Kenyatta and his deputy president, William Ruto, will have trouble celebrating their time in office after what happened at the university. 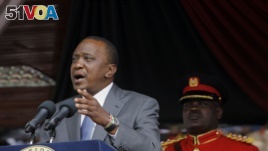 "Anniversaries are meant to be celebratory occasions when you come out with what we may want to call your brag sheet, your score card, and you don't just talk about it -- you also mark it a bit of ‘oomph' and ‘razzmatazz,' which unfortunately they can't do because of this season of mourning. And it's a season of mourning which also exposes their soft underbelly with regard to insecurity."

Some Kenyans say the criticism is unfair. Manoah Espisu is a spokesman for the government. He wants people to change their way of thinking when it comes to terror attacks.

"Our nation is at war. It's a fact that we have to live with. This country is at war. When you are at war, the same rules don't apply and if we are at war, we need our mentality to be slightly different than it is. It's not always about us -- you've got to factor in your enemy."

Investigators are working to learn more about the four gunmen involved in the Garissa University attack. One of them was the son of a chief in Kenya's Mandera County. The attacker had graduated from law school.

Grace Mageka is a member of Peace Ambassador Kenya. She says she cannot understand why such a well-educated young man could take part in such an attack.

"This is something the government needs to look out to find out what was happening. But the whole thing, it made us to be alert. We have to walk with our heads up."

Kenyan officials say they are doing everything possible to protect citizens from al-Shabab. On Wednesday, officials announced action against financial businesses, rights activists and individuals suspected of having supported the activities of the militant group. The government said it was blocking their use of money held in bank accounts. The action affected 13 Somali money transfer companies. Their operating permits were cancelled and bank accounts suspended.

In a statement, an American-based rights group said the government's list raises more questions than it answers. Human Rights Watch said those named have a right to openness and due process of law. The group noted steps taken against two rights groups: Muslims for Human Rights and Haki Africa. It said the measures raise concerns that the government is fighting critical voices and those who question the methods used to fight terrorism in Kenya.

Mohammed Yusuf reported this story from Nairobi. George Grow wrote it for VOA Learning English. Christopher Jones-Cruise was the editor.

anniversary – n. a yearly celebration or observance of an event that happened in the past

corruption – n. actions taken to gain money or property that are legally or morally wrong

oomph – n. a quality that makes something appealing; power or energy

due process – n. the requirement that the government must act in a way that protects a citizen's rights