Update Required To play the media you will need to either update your browser to a recent version or update your Flash plugin.
By Hai Do
31 March, 2016

Ahead of the summit, Obama met with South Korean President Park Geun-hye and Japanese Prime Minister Shinzo Abe to discuss the North Korean nuclear threat in the region.

He said, "One of the topics now most on our minds is the issue of North Korea and we are united in our efforts to deter and defend against North Korean provocations" On Thursday, The Washington Post published an opinion article from President Obama. He wrote, "The international community must remain united in the face of North Korea's continued provocations, including its recent nuclear test and missile launches. The additional sanctions recently imposed on Pyongyang by the United Nations Security Council show that violations have consequences."

The U.N. Security Council adopted a resolution earlier this month to impose tough new sanctions on North Korea. The sanctions are meant to punish North Korea for its recent nuclear and long-range missile tests.

The resolution will need China's cooperation since 90 percent of North Korean trade goes through China. The U.S. has been asking China to use its influence to limit North Korea's nuclear activities.

Rose Gottemoeller is an Under-Secretary of State. She said on Wednesday that the cooperation between the U.S. and China has been "very, very good."

"China joins with us in a very strong and intense focus on ensuring good, solid implementation of the U.N. Security Council resolution, which, as many of you know, places strong constraints on North Korea's ability to continue to conduct commerce across its borders, whether by sea, air or land," said Gottemoeller.

The U.S. and South Korea have also been discussing the deployment of a missile defense system, called THAAD. It stands for Terminal High-Altitude Area Defense.

The missile system is to protect South Korea from the North's nuclear threat. China has opposed the deployment since it would also give the U.S. radar coverage over Chinese territory.

U.S.-China relations, however, are complicated with maritime disputes in the South China Sea. FILE - Chinese dredging vessels are purportedly seen in the waters around Mischief Reef in the disputed Spratly Islands in the South China Sea in this still image from video taken by a P-8A Poseidon surveillance aircraft provided by the U.S. Navy, May 21,

China has launched major construction projects in the South China Sea for the past two years. It has claimed sovereignty over a large part of the sea. China has built new artificial islands, airport runways and buildings, ignoring claims from Taiwan, Vietnam, the Philippines, Malaysia and Brunei.

Recently, China has deployed a radar system and an advanced surface-to-air missile system on Woody Island. The island is part of the Paracel Islands, also claimed by Taiwan and Vietnam.

While the U.S. does not claim any territory in the South China Sea, it has been sending warships through the disputed water near the Spratly and Paracel islands.

China has called U.S. operations in the South China Sea "provocative behavior." But both countries have avoided any escalation of tensions.

Leaders at the summit are especially concerned about the security of nuclear materials and facilities in countries such as Pakistan. On Easter Sunday, a terrorist attack in Lahore killed more than 70 people. 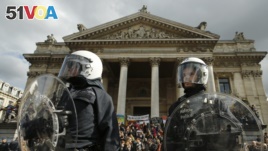 The Brussels terrorist attacks on March 22 showed how dangerous terrorist groups like the Islamic State have become. After the attacks, Belgium has put armed guards at its nuclear facilities.

Sharon Squassoni is an expert with the Center for Strategic and International Studies. She said while progress has been made to secure nuclear materials, "there is still material out there and the material that we're talking about is highly enriched uranium."

The U.S. says the world has 2,000 metric tons of highly enriched uranium and separated plutonium in civilian and military programs.

Ben Rhodes is the White House Deputy National Security Adviser. He said, "We know that terrorist organizations have the desire to get access to these raw materials and their desire to have a nuclear device."

Ken Bredemeier and Mary Alice Salinas reported on this story for VOANews. Hai Do adapted their reports for Learning English. Kathleen Struck was the editor.

provocation - n. an action or occurrence that causes someone to become angry or to do something

consequence - n. something that happens as a result of a particular action or condition

implementation - n. the action of beginning to do or use something