Update Required To play the media you will need to either update your browser to a recent version or update your Flash plugin.
By Alice Bryant
08 April 2020


For years, artists in cities throughout Africa have been making paintings to educate the public on social and health issues. During the Ebola crisis a few years ago, for example, artists around West Africa painted signs and murals to inform people on the deadly effects of the virus.

Now, a group of artists in Dakar, Senegal is making murals to show people how to fight the coronavirus outbreak. To limit the spread of the virus, the government has closed the country's airspace. It also ordered the closure of restaurants, schools and Islamic religious centers.

Senegal's president ordered travel restrictions and set a curfew of 8:00 at night. 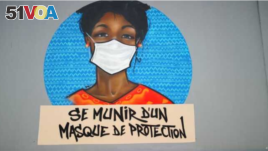 This image created by graffiti collective RBS highlights the need to wear face masks as the coronavirus continues to spread. (Alpha Sy)

But many people are not following calls to remain two meters apart or wash their hands more carefully. Some areas in Dakar are more crowded than others, so keeping distance is not always easy. And water supplies are sometimes cut unexpectedly, so frequent hand washing may not always be possible.

In a country where only half the population can read, art is an effective way of sharing an important message.

Alpha Sy is an art student and a member of Senegalese graffiti artist group RBS, short for Radikl Bomb Shot. About 30 artists belong to the group. They have been creating murals around Dakar to demonstrate good hygiene practices and to tell people to stay home and respect the curfew.

Sy said he was frightened for everyone because many people do not realize what is happening. He said people think the virus is only a problem in Europe and that it will not spread to Senegal. He also does not think the country's hospitals could take as many as 10,000 people.

Because of Senegal's low literacy rate, Sy said, art is an effective way to share an important message. He said his group created the murals for everyone. The artists wanted people to understand the message, so they decided to focus more on the picture than the writing.

The graffiti collective was formed in 2012 as part of efforts to raise social issues in a way that young people could relate to. The group's projects have focused on violence against women and paintings of African leaders such as Nelson Mandela.

The first of the murals for COVID-19, the disease resulting from the coronavirus, was done in partnership with Dakar's Cheikh Anta Diop University.

Abdoulaye Sow is a director at the university. He ordered the mural painted on its grounds. He said the school is an ideal place for the mural because a lot of people walk by.

Sow said people do not have time to stop for long, so a painting like this helps the message have the greatest effect.

The graffiti collective has completed three murals so far. They hope to create about 12 COVID-related works so that their message can be seen in every neighborhood in Dakar.

outbreak - a sudden start or increase of disease

graffiti – n. pictures or words painted or drawn on a wall, building or something else

hygiene – n. the things that you do to keep yourself and your surroundings clean in order to maintain good health