Update Required To play the media you will need to either update your browser to a recent version or update your Flash plugin.
By Jonathan Evans
30 March 2021


Violent demonstrations broke out in Senegal earlier this month in protest of injustice and inequality in the country. Artist Omar Ba protested in a different way: he painted.

Ba said that what young people are doing in the streets, he is doing in his workspace near the country's capital, Dakar.

Ba is one of Senegal's best-known modern artists. He has often used his art to make political statements. Currently, some of his paintings are on show at the Galerie Templon in Brussels, Belgium. The show, called Anomalies, comments on power-hungry world leaders through a series of paintings of imaginary heads of state. An anomaly is something that is unusual or unexpected. 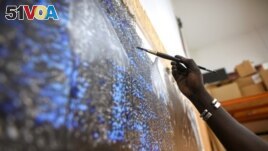 Senegalese artist Omar Ba paints on a canvas hanging from the wall of his studio in Bambilor, Senegal on March 12, 2021. REUTERS/ Cooper Inveen

Ba said he was shocked to see such intense violence on the streets of his own country.

"These are things I had seen on TV, but never here," he told Reuters.

"I think visual art is something I have to use to denounce what's not working, or to talk about what is positive, in society."

The protests began after the arrest of a popular opposition leader, but widened into demonstrations about economic inequality, a condition worsened by the COVID-19 crisis. Thousands took to the streets. Some protesters threw rocks at police. Security forces fired their guns at protesters.

Some people worry that Senegal's President Macky Sall will try to extend his rule beyond the permitted two terms. Other African leaders have used constitutional changes to extend their time in power.

Sall has not commented on whether he will seek a third term.

Ba normally does not give names to the subjects he paints. But for his next collection, he said he might paint Sall.

Ba said once leaders are elected, they completely change their way of thinking and speaking. He said that is why he named his art show Anomalies.

Four of the 12 paintings in the series deal with the COVID-19 crisis. Colorful shapes and Ba's own footprints cover the canvas, representing a sense of confusion and how it feels to be trapped.

COVID-19 exposed inequality and corruption in Africa, Ba said. He said the wealthy were forced to depend on the same troubled public health services that the poor must use. Normally, the rich seek better care elsewhere.

Ba said, "Nobody could take planes to get treatment in Europe or the United States." He add that "for once people realized that in their own hospitals there was nothing."

Nellie Peyton and Ngouda Dione reported on this story for the Reuters news service. Jonathan Evans adapted this story for Learning English. Caty Weaver was the editor.

visual – adj. relating to seeing or to the eyes

society –n. people in general thought of as living together in organized communities with shared laws, traditions, and values

canvas –n. a specially prepared piece of cloth on which a picture can be painted by an artist

confusion –n. a situation in which people are uncertain about what to do or are unable to understand something clearly