Update Required To play the media you will need to either update your browser to a recent version or update your Flash plugin.
By George Grow and Kim Varzi
12 July, 2012

We also tell you about fifteen year old Kyla Ross. She is the youngest member of the American Olympic gymnastics team. 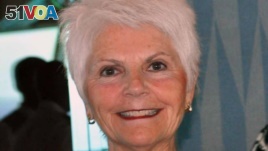 Jeanne Kelly directs the program
But first, we tell about some older Americans who are singing for their health.

Over ten years ago, America's National Endowment for the Arts began to study creativity and aging. The NEA, the National Institutes of Health and four other programs launched the Creativity and Aging study. It examined the effect of participatory art programs on the physical and mental health of older individuals.

The study took place in three parts of the country, including Washington, DC. More than one hundred older adults from the Washington area were taught to sing and perform together. They were compared to a control group of individuals who did not sing.

Jeanne Kelly directed the singing program. She says the study found that those working with her were happier and suffered less from depression than the inactive adults. The singers also took fewer medicines and visited the doctor less. And they had fewer falls because their bodies were strengthened.

What began as a study has grown into the Encore Creativity for Older Adults program. Currently, the program has more than five hundred fifty participants. The average age is seventy-three, but some of the individuals are ninety years old or older.

There are now eleven choral groups in the Washington area and one in Ohio. Members do not have to prove their singing ability, and no experience is necessary. Jeanne Kelly talks about the program.

JEANNE KELLY: "Our singers, some of them have sung their entire life. Some haven't sung for 40 years, because they've been busy with a career, they've been busy raising families. And then some have never sung."

The eleven groups all study the same song, which makes it easy during when a performance date nears. They can be combined into a larger chorus if the theater or concert hall is very large. After the concert season, Jeanne Kelly directs two summer programs in New York and Maryland. Singers have only four days to learn five songs before they perform in public.

Eighty-two year old Jeanne Heather has attended the summer programs. She explains why she went.

JEANNE HEATHER: "Because it's fun and because I learn so many things. They teach us here, not only about the music, but how to sing, and how to sing better. And they don't really get mad if you miss a note."

Seventy four year old Margo Newhouse joined Encore last year. She says the program was very helpful when she recovered from a fall.

MARGO NEWHOUSE: "Definitely, I was very tired each day at the end of the day, and it was a healthy tiredness, which I am sure has helped me with my activity level."

The Creativity and Aging study may have ended years ago, but the choral groups that were studied have continued and expanded. I'm Faith Lapidus.

JUNE SIMMS: Fifteen-year-old Kyla Ross of California is the youngest member of the American Olympic gymnastics team. She says that going to the twenty-twelve Summer Games is like a dream come true. But, as we hear from Bob Doughty, getting to London means she has had to work harder than most girls her age.

BOB DOUGHTY: Kyla Ross does not live the life of an average teenage girl. She spends thirty to thirty-five hours a week training at the Gym-Max Academy of Gymnastics, south of Los Angeles. She goes to school only part-time.

KLYA ROSS: "Of course, it's always hard to fit in homework, especially this year. I had to cut back on a lot of school. It sort of feels unreal. I mean, I've been working for the Olympics all my life, and it's something that I've been training for. So to be able to say that is such a dream come true."

Kyla Ross has stayed in school so that she can finish her studies and graduate in four years. Her father, Jason Ross, says it has not been easy.

JASON ROSS: "You have to be a very disciplined person. I mean from practice to going straight to do your homework. You might want to rest or, disciplined in the fact that oh you want to hang out with your friends, and people are going out. But you have to stay home and finish your homework or get rest because you have a competition. So (it) definitely takes a lot of discipline."

Kyla Ross's training coach, Jenny Liang, says it takes discipline of a different kind to deal with the pressure at the Olympics. She says the biggest issue at the Olympic Games will be in the young gymnast's own mind. Mrs. Liang says her mind has to be even stronger. She has to think, ‘I've practiced this one thousand times before. It's just changing the venue.' The gymnastic coach says if you think too much, you cannot do anything."

Jenny Liang and her husband Howie have coached Kyla for the past seven years. They met in China as gymnasts for the Chinese National Team. They later moved to the United States, where they opened the Gym-Max Academy of Gymnastics.

Kyla Ross was born in Hawaii. Her parents put her in a gymnastics class when she was three years old to help her burn off energy. Jason Ross says he never expected his daughter to compete at the Olympics.

JASON ROSS: "You just recollect on all the times, you dropped her off (at) practices, (the) to struggles she's had, also the time she's invested into (gymnastics), and just the gratifying feeling that she achieved her goal and really put a lot of work into it, and it's actually happened..."

KYLA ROSS: "From this experience, it's definite been a really long journey and as my dad tells me, ‘You always have to enjoy the moment.' I definitely want to have fun when I go to London and enjoy being with the team competing, and hopefully representing Team USA as well as we can."

The United States women's gymnastics team won its first ever gold medal at the 1996 Summer Olympics. That is the same year Kyla Ross was born. Maybe this year she can help the women's team bring home another gold. Kyla Ross will be training with her four team members in Texas before flying off to London for the Summer Games. I'm Bob Doughty.

John Mayer seems to hit all the right notes when he sings. But, the singer has been known to miss the mark more than a few times when he opens his mouth to speak. He made news a few years ago after speaking with Playboy magazine about former girlfriends Jessica Simpson and Jennifer Aniston. He also made some not so nice comments about black women.

Now, the seven-time Grammy Award winning singer is back. He has a new album, a new sound and possibly a new attitude. Faith Lapidus has more.

"Shadow Days" is the first release from John Mayer's latest CD, "Born and Raised." It is the fifth studio album from the singer, songwriter and musician. It also is his third album to reach number one on Billboard's Top 200 Albums chart. And it is his first release since his Playboy comments made news headlines two years ago.

Recently, he explained those comments as a failed attempt to make himself sound more exciting. While not actually apologizing for what he said, he did seem to express some sense of regret. The same can be said of his latest CD.

On the song "Shadow Days," John Mayer sings "it sucks to be honest and it hurts to be real." He also says his "shadow days are over now," and goes on to declare himself a "good man with a good heart."

Some critics have called John Mayer's new album his most honest, sincere and emotional work to date. Songs like "Love is a Verb" are praised as perfect examples.

A new attitude is not the only thing that seems different about John Mayer. The sound of his music has also taken on a new direction. His traditional pop-rock sound has been replaced with more of a folk music kind of feeling. David Crosby and Graham Nash join him on the album's title track, "Born and Raised."

John Mayer recorded most of the new songs with Grammy Award winning producer John Was before doctors operated on his throat last year. In March, he was forced to cancel a number of performances in the United States after his throat problems returned. He now says he is not sure when he will be able to perform in support of his new album.