Update Required To play the media you will need to either update your browser to a recent version or update your Flash plugin.
By John Russell
30 June 2022


Do English speakers consider short sentences to be childish?

A reader sent us a message asking about that very question.

In today's Everyday Grammar, we will explore an area of connection between sentence length, writing style, and grammar. 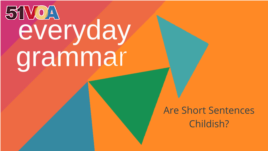 The answer is this: it depends.

If the answer to these questions is "yes," then the writing is not childish.

Ben Blatt is a writer. In 2017, he wrote a book called Nabokov's Favorite Word is Mauve. In the book, he explores how famous writers use language.

Consider these lines from A Clean, Well-Lighted Place by Ernest Hemingway. Hemingway was a famous, Nobel Prize-winning writer from the United States.

These lines have 62 words and seven sentences. On average, there are just under nine words per sentence.

Some English writing guides suggest sentences of around 15 words are likely to be understood. Sentences beyond 25 words risk becoming difficult to understand. This is because longer sentences usually have more clauses – subject and predicate groups. The greater the number of clauses, the greater the risk the sentence loses clarity.

Yet it is useful to write sentences with more than one clause. Such sentences create variety – and variety, as the expression goes, is the spice of life.

One useful way to keep clauses separate and clear is by joining them with a semicolon.

This independent clause has a subject and a predicate.

The subject is "Tom," and the predicate is "likes salad."

You can combine two or more independent clauses that carry similar ideas. You can separate them with a semicolon (;)

A semicolon can be used to form a compound sentence.

These two short statements — three words each — can be put together to make the following sentence that has six words:

More information can be added to one of the clauses to make longer statements.

These sentences have 10 and 11 words, respectively.

Compound sentences can also be used to describe actions, as in:

The shark came close to the boat; the passengers yelled and took pictures.

Three clauses could be combined along with a connector – a conjunctive adverb such as "however," "unfortunately," or "therefore."

Note that this example combines three clauses yet only has 12 words.

The central idea of this report is that sentence length and sentence quality are not the same thing.

As a very general suggestion, try to keep sentences around 15 words on average. Try to minimize the number of clauses per sentence. If possible, include sentence variety.

If you want to write sentences with several clauses, experiment with the semicolon idea. It is a useful way to create sentence variety and still keep thoughts clear and separate.

For those of you reading online, we will end our program with a question. We used a complex version of the semicolon structure two times earlier in this report. Can you find these sentences? How are they similar or different from what you learned about in today's report? Write to us in the comments section of our website, learningenglish.51voa.com.

style –n. a particular way in which something is done, created or performed

median – n. mathematics : the middle value in a series of values arranged from smallest to largest

bar – n. a building or room where alcoholic drinks and sometimes food are served

dignity – n. a way of appearing or behaving that suggests seriousness and self-control; the quality of being worthy of honor or respect

clause – n. grammar : a part of a sentence that has its own subject and verb