Seoul Creates New Use for Waste

Update Required To play the media you will need to either update your browser to a recent version or update your Flash plugin.
By Alice Bryant
12 December, 2018


South Korea's capital, Seoul, has a problem with waste.

In April, the city had too much waste from man-made products, such as plastic and vinyl. The reason: recycling companies refused to collect them because it is no longer profitable.

As a result, unrecycled goods began piling up in Seoul's neighborhoods. Talks between the companies and city officials finally ensured removal after about two weeks. But the bigger problem remains: what to do with all of the unrecycled waste.

Seoul officials are turning to upcycling to fix the problem. The term "upcycling" means using old or unwanted goods and materials to create valuable new products. An example would be making a mailbox from an aging computer tower. 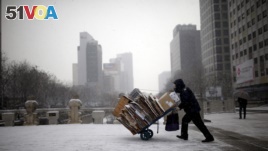 FILE - A man carries scraps in a handcart during snowfall in central Seoul, South Korea, Feb. 16, 2016. With the recycling market dimming, Seoul is turning to upcycling.

The Seoul Upcycling Plaza, or SUP building is home to the process of collecting, separating and breaking down disposed products into reusable materials and "upcycled" goods. Thirty-five upcycling businesses were chosen in a competition to be housed there and begin the process.

SUP director Yoon Dayyoung admits there are limits to recycling. Not everything can be broken down and made into reusable materials, she said. So, upcycling is needed to add value to old, unwanted goods.

Seoul plans to recycle more than 70 percent of its plastics by the year 2030. To this aim, Yoon said, SUP's materials bank will supply the materials for people to produce upcycled goods. "People can find more than 400 [kinds] of materials and...purchase it for their purpose," she added.

Most companies moving into the upcycling business make specialty products with the materials they collect. These include things like origami supplies made from used milk containers and dinner plates made from flattened wine bottles. Visitors can buy products or, if they choose, help to produce the upcycled goods.

A service center at SUP also repairs broken electronic devices with parts taken from machines that no longer work. 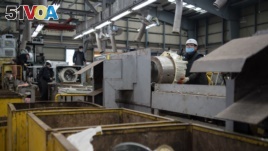 A worker disassembles a discarded washing machine at the Metropolitan Electronics Recycling Center in Yongin, south of Seoul, South Korea, Jan. 13, 2017. Electronic waste is rising sharply across Asia, with serious consequences for human health and the en

Yet many of the "upcyclers" and suppliers make their products by hand and do not yet have enough workers to increase production. And some people are unhappy that the upcycled products cost more than they had expected.

A business called Touch4Good upcycles signs into handbags, wallets and other things. The owner, Park Mi-hyeon, says it is important to think about the process in the right way. She says that upcycling is more about making specialized goods than making large amounts of one thing, like a factory would.

Park has operated many upcycling projects since 2008 and now operates the city's material research center for upcycling. She says most upcycling material must be separated by hand and that new products are also made by hand.

She said that the upcycling market in South Korea has a good chance of growing because there are more than 200 companies in business.

But environmental experts suggest it is more important to reduce the amount of plastic being used than to develop upcycling. Around the world, only nine percent of plastic is actually recycled. One reason is that making new plastic costs less than recycling used plastic. And single-stream recycling has made the separation and cleaning of recyclable goods even more costly and difficult.

In Seoul, the American coffeehouse company Starbucks has replaced plastic straws with paper ones. Other restaurants have also stopped using plastic straws and are asking people to bring their own straws. Still others have moved to such materials as metal straws.

Other eateries are asking people to bring reusable drink cups. And in supermarkets in Seoul, single-use plastic bags are banned.

In addition, the South Korean capital plans to decrease use of single-use products in the city government beginning in 2020.

Lee Ju-hyun and Steve Miller reported this story for VOA News. Alice Bryant adapted it for Learning English. George Grow was the editor.

pile up – v. to increase in amount or number to a total that is difficult to manage

tower – n. the plastic container that holds the electronic elements of a computer and often sits on the floor

disposed – adj. describing something that has been thrown in the garbage

origami – n. the Japanese art of folding paper into shapes that look like birds, animals and other things

single-stream recycling – adj. a system of recycling in which paper, plastic, metal and other materials are all mixed in a collection truck

straw – n. a thin tube used for sucking up a drink