Update Required To play the media you will need to either update your browser to a recent version or update your Flash plugin.
By John Russell
09 September 2021


Saturday, September 11, is the 20th anniversary of the terrorist attacks in the United States. Around 3000 people were killed on that day in 2001, when al-Qaida agents hijacked and crashed airplanes in New York, Virginia and Pennsylvania.

People across the U.S. will share their thoughts and feelings about that day on the anniversary. News shows and other media will observe the day with special programming. People will talk about what they remember about the day, the effects the attacks had on them, the U.S. reaction, and more.

Such discussions often use verbs in simple and progressive forms. 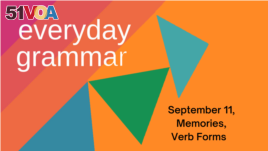 In today's Everyday Grammar, we will explore the grammar behind such structures.

Let's begin with a few important terms and ideas.

English has several verb forms; two of them are the simple and progressive forms.

I want to read about English grammar.

Here, the verbs want and love are in their simple present forms. Their past forms are wanted and loved.

Now consider a person who is in the middle of an action – reading a grammar book. That person might say,

I am reading about English grammar.

In general, English speakers are more likely to use simple verbs than progressive verbs in everyday discussions.

But discussions about memories and past experiences will likely involve verb forms of both kinds, as we will see.

Let's first explore how simple forms might appear in discussions about September 11.

Consider this example. Imagine you are listening to an American news program. You might hear something like the following discussion:

Do you remember where you were on September 11?

I was at work. I heard about the attacks during my morning coffee break.

Or you might hear a discussion with a person who is not old enough to remember the day:

Do you remember where you were on September 11?

No, I don't know what it was like - but I believe it was very frightening.

Notice that the examples included simple present and simple past forms of verbs such as remember, believe, hear, know, be.

Many of these might be called ‘non-action' verbs. Such verbs are mostly used to express ideas, memories, or states of being.

Such verbs are less common or not used in the progressive form.

Now consider how progressive verb forms might appear in a discussion about September 11.

Imagine you are watching another news broadcast. You might hear the following:

Do you remember what you were doing on September 11 when you first heard the news?

I was listening to the radio, and the regular program was interrupted.

I was watching television at home.

I was sitting at my desk when a coworker ran over to me and told me the news.

In the examples, verbs such as listen, watch, and sit appeared in their past progressive form. In other words, these actions were in progress when the person learned about the news.

When you hear news broadcasts or read internet discussions about September 11 – or any other kind of important event – pay careful attention to how the speakers or writers use simple and progressive verb forms.

progressive –n. A progressive verb form in English consists of a form of the verb "be" followed by the main verb's present participle.

interrupt – v. to cause (something) to stop happening for a time