Update Required To play the media you will need to either update your browser to a recent version or update your Flash plugin.
By Hai Do
10 August 2022


American tennis player Serena Williams said this week that she is ready to leave the sport and turn her attention to "being a mom."

Williams announced her decision in the magazine Vogue and on her Instagram account. She wrote in Vogue, "There comes a time in life when we have to decide to move in a different direction. That time is always hard when you love something so much. My goodness do I enjoy tennis. But now, the countdown has begun."

Williams noted on Instagram, "I have to focus on being a mom..." 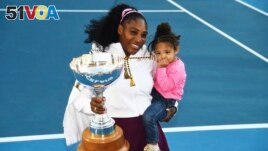 Williams, who turns 41 next month, suggested that the upcoming U.S. Open championship could be her last tournament.

Williams won her 23rd Grand Slam at the 2017 Australian Open. No one knew it at the time, but Williams was two months pregnant. She gave birth to her daughter Olympia later that year on September 1.

Williams wrote in Vogue that she wants to grow her family and have a second child. The tennis champion wrote, "I never wanted to have to choose between tennis and a family. I don't think it's fair. If I were a guy I wouldn't be writing this because I'd be out there playing and winning while my wife was doing the physical labor of expanding our family."

That feeling is something that many women can relate to. Sherie Randolph is a history professor at Georgia Tech University. She is working on a book about African American mothers. She said, "Society makes women think that they can have everything all at once — be the best hands-on-mom and at the top of the field."

Jo McKinney, who is 57, is a New York advertising executive. She said, "I got goosebumps as I read Serena's piece because she said what many of us feel and are afraid to voice: It's not fair, and something's got to give."

The choices are even more difficult for women in professional sports, said Lisa Banks. She is an employment lawyer who works on gender and sports. "You can have it all, but can you have it at the same time and the same level, if you're going through pregnancies? No, you miss some time, you miss training," she said.

Other female sports stars, like American runners Allyson Felix and Alysia Montano, have lost sponsorship money after getting pregnant.

Distance runner Kara Goucher also fought battles over pregnancy pay. She said, "You see the dad at the Super Bowl holding his kids. The reason he's able to do that ... is because someone else is there taking care of their children. That's not how it is for mothers."

Tennis player Chris Evert won 18 Grand Slam championships in her career. She retired at age 34 and started a family two years later. "The motherhood/tennis career subject is not one I experienced," she said in an email to the Associated Press. She noted that Williams is a "leader on many important cultural, social and gender issues."

Dearica Hamby is a basketball player with the Women's National Basketball Association (WNBA). Like Williams, Hamby has a 5-year-old daughter. She said Williams has been "an example for a lot of us, especially mothers being able to compete at such a high level."

Hamby said she has talked a lot with other players about choosing between motherhood and professional sports. She said, "It's the reality of the world we live in."

Joycelyn Noveck reported this story for The Associated Press. Hai Do adapted the story for Learning English.

focus - v. to direct attention or effort at something specific

championship - n. an important competition that decides which player is the best

title - n. the position of being the champion

goosebump - n. small bumps on the skin that are caused by sudden feeling of excitement

gender - n. a person sense of being such as male or female