Update Required To play the media you will need to either update your browser to a recent version or update your Flash plugin.
By Ashley Thompson
25 July, 2018

American tennis player Serena Williams is not pleased about getting more drug tests than her competitors.

Williams expressed her opinion Tuesday after receiving another unannounced visit to test for performance-improving substances. 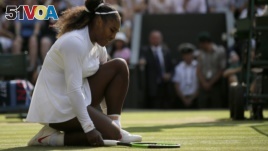 FILE - Serena Williams of the United States kneels after losing a point to Germany's Angelique Kerber during their women's singles final match at the Wimbledon Tennis Championships, in London, July 14, 2018. (AP Photo/Tim Ireland)

Williams wrote on Twitter, "And it's that time of the day to get ‘randomly' drug tested and only test Serena. Out of all the players it's been proven I'm the one getting tested the most. Discrimination? I think so."

In another tweet, Williams wrote, ‘But I'm ready to do whatever it takes to have a clean sport so bring it on. I'm excited.'

It is not the first time this year that Williams has complained about being drug-tested more than other American players. Last month, she told reporters ahead of the Wimbledon tennis tournament, "Just test everyone equally."

Williams made it to the Wimbledon final, where she lost to Germany's Angelique Kerber.

A report in June by the news site Deadspin found that Williams had been drug tested five times in 2018. That is at least two times more than other American women in the sport.

A spokeswoman for Williams called the frequent drug testing "invasive" and "targeted" treatment. She told Deadspin "Serena Williams has never tested positive for any illegal substance despite being tested... four times more frequently than her peers."

Williams returned to competition earlier this year after taking time off during her pregnancy. She gave birth to her daughter last September.

Following her Wimbledon loss, Williams said she had proven to herself that she could still compete to win Grand Slams. She has won 23 Grand Slams in over 20 years as a professional tennis player. One more Grand Slam title would tie Williams with Australia's Margaret Court for the most ever.

randomly - adv. in a way that does not follow a particular plan or pattern

discrimination - n. the practice of unfairly treating a person or group of people differently from other people or groups of people

complain - v. to say or write that you are unhappy, sick, uncomfortable, etc., or that you do not like something

title - n. the status or position of being the champion in a sport or other competition