Update Required To play the media you will need to either update your browser to a recent version or update your Flash plugin.
By Hai Do
17 November 2021

People from around the world are trying to set all kinds of records on this day. They include records for most football crossovers while sitting down to most consecutive jumps over cars on a pogo stick.

British gymnast Ashley Watson said, "If you want to be a Guinness World Records title holder just go for it." Watson broke his own record on gymnastics equipment for "farthest backflip between horizontal bars" with a distance of six meters. He set the previous record of 5.87 meters back in 2018.

Venezuelan soccer player Laura Biondo broke not one but two records for the day. She recorded "most sit-down football crossovers in 30 seconds (female)" with 62 and "most double around the world ball control tricks in one minute (female)" with 24. The two new records added to Biondo's 11 other Guinness records. Soccer is the American word for the sport of football.

Biondo said, "If you set yourself a goal, you can definitely achieve it if you put hard work into it." She is planning to set a few more records to reach a total of at least 15. 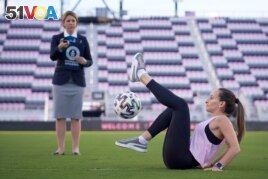 The idea for Guinness World Records came in the early 1950s when some hunters in Wexford, Ireland argued about the fastest game bird. They could not find the answer in any book. So Hugh Beaver came up with an idea for a book to settle the arguments and to publicize his beer company, Guinness. The book had sold 143 million copies by 2019. There are now television programs, game shows and museums to show the records.

In case you are wondering, Guinness says the fastest game bird is the golden plover.

In Nanchong, China, Zhang Shuang, who weighs 70 kilograms, pulled a 1225-kilogram vehicle while walking on his hands. He was able to pass the 50-meter mark in 1 minute 13.27 seconds. That was good enough for the "fastest time to pull a car 50 meters walking on hands."

Zhang said he is walking on his hands every day and often shows them off to his students.

In southeastern China, 11-year-old Wang Guanwutong failed in his first attempt to set the record for "most consecutive breakdance airflares (male)." An airflare is a dance movement in which the dancer spins around the dance floor on one hand.

Wang finally set a new record for males of 94 airflares. However, he has a long way to go to match the female record of 121 airflares set by seven-year-old Qi Yufan, also of China.

If you don't know what they are, don't try them.

In Doha, Qatar, Ayoub Touabe of Morocco used one of his legs instead of his hands to set the record for "most single leg backward somersaults in 30 seconds." He completed 12 while standing on one leg.

In Britain, an American set his own record for "most consecutive cars jumped over on a pogo stick."

Tyler Phillips used a pogo stick, a kind of toy used for jumping up and down, to jump over five London Black taxicabs to beat the old record of four. Each taxicab car is nearly 2 meters tall and 1.6 meter wide.

He said, "Training for this record was way harder than actually doing it."

Hai Do wrote this report with information from Guinness World Records. Mario Ritter Jr. was the editor.

consecutive –adj. following one after another in a series

gymnast –n. a person who performs physical exercises on a mat or on special equipment as part of an sports competition; a person who takes part in the sport of gymnastics

achieve –v. to get or reach a goal by working hard

spin –v. to turn or cause something to turn around in circles repeatedly

somersault –n. a forward or backward movement of your body on the ground or in the air that is made by bringing your feet over your head