Update Required To play the media you will need to either update your browser to a recent version or update your Flash plugin.
By Bryan Lynn
18 July, 2018


The United States has settled a case with a gun rights activist that permits him to publish instructions for making guns with a 3-D printer.

Activist Cody Wilson began legal action against the government in 2015 after it forced him to remove files he had placed on the internet. The files provided directions for making a handgun with a 3-D printer.

Wilson had made such a gun himself and had successfully test-fired it in 2013. He named the gun the Liberator.

Tens of thousands of people downloaded plans to make their own gun. Wilson has called such weapons "downloadable guns." But the U.S. State Department said Wilson's files broke laws on international gun trafficking.

Wilson and his legal team argued in court that the State Department order violated Wilson's right to free speech. They noted that the files shared on the internet contained only plans, not weapons or gun parts.

The foundation recently announced it had reached a settlement with the U.S. government. It said the agreement - offered by the U.S. Justice Department - permits Wilson to legally put his instructional materials back on the internet.

The Justice Department did not publicly comment on the settlement. The agreement was confirmed in court documents provided to several major media organizations.

The Second Amendment Foundation's founder and Executive Vice President, Alan M. Gottlieb, praised the settlement. Gottlieb called the decision a "victory for free speech." He added that he believed the settlement represented a major defeat for groups seeking to increase government gun controls.

A message on Wilson's Defense Distributed website announced he plans to relaunch the website DEFCAD on August 1. This will permit him to freely share instructions for making 3-D printed guns. "The age of the downloadable gun formally begins," the message reads. 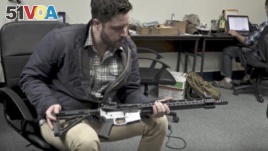 "I consider it a truly grand thing," Wilson told Wired magazine about the decision. "It will be an irrevocable part of political life that guns are downloadable, and we helped to do that."

The DEFCAD website currently lists information on a number of other 3-D printed weapons, in addition to the first gun introduced in 2013. These include the semi-automatic models AR-10 and AR-15, as well as a Beretta M9 handgun and others.

Gun control supporters are expected to oppose the settlement. They have argued against 3-D guns because they can be made without the usual government registration requirements. These guns also do not have manufacturing numbers for identification purposes. Since there is no record or history for guns created this way, they have also been called "ghost" weapons.

Wired magazine has named Wilson on several of its yearly lists of the "most dangerous people on the internet."

Wilson told the magazine the new website will accept instructional materials from users as well. His goal is to provide a searchable, user-created collection of information on how to make any firearm.

Wilson's organization also sells some weapons that are 80 percent complete. He explains in a website video that because they are 20 percent unfinished, he is permitted to sell them as pieces of metal instead of guns. Buyers of the unfinished firearms can then use their own equipment to complete the weapon.

instructions – n. information explaining how to do or use something

ghost – n. the soul of a dead person thought of as living in an unseen world

irrevocable – adj. not capable of being changed