Update Required To play the media you will need to either update your browser to a recent version or update your Flash plugin.
By Dan Friedell
29 August, 2017

The U.S. Open is the last big event of the year in international tennis.

The late-summer championship in New York, the Australian Open, the French Open, and Wimbledon are known as the "Grand Slams."

Maria Sharapova, the Russian tennis star, has not played in a Grand Slam event since January 2016. After the Australian Open in 2016, she tested positive for a banned drug called meldonium. She was suspended from tennis for 15 months.

Meldonium is thought to help the heart process energy more easily and allow athletes to play and practice harder without getting sore and tired.

Sharapova returned to competitive tennis earlier this year after serving her punishment.

On Monday night in New York, she defeated second-ranked Simona Halep of Romania in three sets.

The match took three hours, which is unusual for the early rounds at the U.S. Open. Normally, those matches are faster because one of the top-ranked players in the world is playing a much weaker opponent.

Due to her suspension, Sharapova is no longer ranked as one of the best in the world, but she is still a very good player. After the match, Sharapova moved up to 134th in the world.

Many tennis fans and reporters had the same reaction: "She's back!"

Even Halep was impressed. "She played really well," Halep said, about Sharapova. Others said Sharapova celebrated as if she had won the championship. 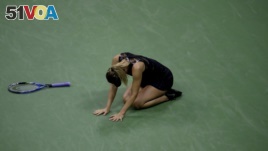 Maria Sharapova, of Russia, reacts after defeating Simona Halep, of Romania, during the first round of the U.S. Open tennis tournament.

Sharapova's return to high-level tennis may turn out to be good news for the U.S. Open. The tournament is missing a number of top players.

Serena Williams is not playing because she is in the last month of her pregnancy. Williams announced she was pregnant in April and the baby will be born sometime soon -- perhaps while the tournament is still going on.

In the men's tournament, three of the world's top players are missing. Andy Murray of Great Britain decided not to play due to a hip injury. Last year's finalists – Novak Djokovic and Stan Wawrinka – are not playing either, due to injuries.

Long-time favorites Rafael Nadal and Roger Federer are in the tournament, but they cannot meet in the finals. They are in the same half of the bracket.

Overall, five of the top 11 men in the tennis rankings are missing.

That means more people may be paying attention to Sharapova's matches if she keeps winning. She is scheduled to play again on Wednesday morning.

Chris Evert is a former champion player and a tennis commentator. She said: "women's tennis needs her, and I'm glad she's back."

Ben Rothenberg is a New York Times tennis writer. He said the match might have been the best-ever first-round match of a Grand Slam.

Dan Friedell wrote this story for VOA Learning English based on reports by Tennis.com and the Associated Press. Hai Do was the editor.

Will you follow Sharapova's progress in the U.S. Open? We want to know. Write to us in the Comments Section or on 51VOA.COM.

practice – n. to do something again and again in order to become better at it

bracket – n. a chart showing the series of games to be played during a tournament