Update Required To play the media you will need to either update your browser to a recent version or update your Flash plugin.
By John Russell
23 November, 2017


University of Cambridge scientists have trained sheep to recognize the faces of famous people.

The scientists hope facial recognition may help with their understanding of neurodegenerative diseases.

The researchers showed the sheep pictures of people on two computer screens. One screen had an unknown person and the other had one of four famous people. 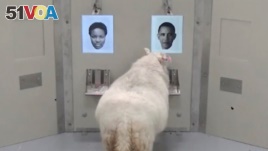 A picture taken from an undated video shows a sheep approaching a photo of Barack Obama during a Cambridge University experiment, in Cambridge, Britain.

The animals were given food for choosing the photograph of the famous person. They chose the correct photograph by breaking an infrared beam near the flat surface showing the photo.

If they chose the wrong image, an electric signaling device would make a sound, and the sheep would receive no treat.

The sheep eventually were able to identify the famous face eight times out of every ten tries.

Professor Jenny Morton was the leader of the study. "We've shown that sheep have advanced face-recognition abilities, comparable with those of humans and monkeys," she noted.

The sheep were less successful when presented with the faces at a new angle or from a different direction. However, the researchers said the performance of the animals on this test was similar to the levels seen when humans took the test.

Scientists aim to use the sheep as models to study disorders of the brain, such as Huntington's disease. This disorder develops over a long period of time and affects the brain's ability to work.

Mark Hanrahan reported on this story for the Reuters news agency. John Russell adapted his report for VOA Learning English. George Grow was the editor.

beam – n. a line of light coming from a source (such as the sun or a headlight)

screen – n. the surface on which the image appears on an electronic device

angle – n. the difference between the direction of two lines that come together