Update Required To play the media you will need to either update your browser to a recent version or update your Flash plugin.
By Anne Ball
29 April, 2015


Shinzo Abe is the first Japanese prime minister to receive the rare honor of addressing a Joint Meeting of the U.S. Congress. Mr. Abe expressed "deep repentance" over Japan's role in World War II and said that Japan will play a larger role in the security of the region.

With his address, Mr. Abe joined a long list of world leaders who came before him. They came all over the world, Italy, Iraq, Australia, Romania and even West Germany – back when there was a West Germany.

They addressed senators and congressmen in the House of Representatives chamber because it is large enough to hold the whole Congress. The most recent leader before Mr. Abe was Afghan President Mohammad Ashraf Ghani last March. 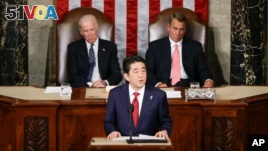 Also in March was a controversial appearance by Benjamin Netanyahu, the prime minister of Israel. Republican House Speaker John Boehner invited Netanyahu without asking the White House. That was the third time that Netanyahu has addressed a Joint Meeting of Congress. The appearance tied him with Winston Churchill for the most times addressing Congress.

Major world leaders like South Africa's Nelson Mandela, Vaclav Havel of Czechoslovakia and Lech Walesa of Poland have also stood at the podium of the historic House chamber.

However, it was a king who actually spoke in the first Joint Meeting of Congress on December 18, 1874. King Kalakaua of Hawaii made his appearance when Hawaii was a kingdom, and not a U.S. state.

Few women have taken to that podium. German Chancellor Angela Merkel was the last woman to address the joint meeting more than five years ago. Before her was Britain's Queen Elizabeth in 1991 and Prime Minister Margaret Thatcher in 1985.

Before there were joint meetings of Congress, each chamber, the House or the Senate, would receive guests individually. The Marquis de Lafayette was the first to speak at a House reception in December 1824.

Israel's Netanyahu was not the first to stir controversy about his invitation to speak to Congress. In 1987, the Soviet leader Mikhail Gorbachev was in Washington for a summit with U.S. President Ronald Reagan. It was reported that he would be invited to speak to Congress in a joint meeting. The invitation was never sent because some senators reportedly objected.

For Japanese Prime Minister Shinzo Abe, there was personal as well as historic importance to his speech. His grandfather, Kishi Nobusuke, addressed the House as Japan's prime minister, back in 1957.

Anne Ball wrote this story for Learning English. Hai Do was the editor.

podium-n. a raised platform for speaking

controversy-n. an argument that involves many people who strongly disagree about something