Update Required To play the media you will need to either update your browser to a recent version or update your Flash plugin.
By Susan Shand
29 March 2021


Specialty teams on Monday set free a large container ship that had stopped international trade through the Suez Canal.

For nearly one week, the ship has brought one of the world's most important sea trade routes to a complete stop. It held up nearly $9 billion of trade each day.

Several tugboats pulled the large ship, called the Ever Given, from the canal's side, where it has been stuck since last Tuesday. 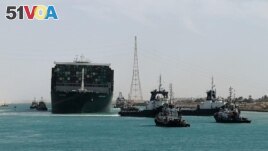 Ship Ever Given, one of the world's largest container ships, is seen after it was fully floated in Suez Canal, Egypt, March 29, 2021.

The teams pulled the 220,000-ton ship toward the Great Bitter Lake, which is halfway between the north and south end of the canal. Experts will examine the ship there.

Video released by the Suez Canal Authority showed the Ever Given moving, surrounded by the tugboats that helped free it. The tugboats sounded their horns to celebrate the end of the crisis.

"We pulled it off!" said Peter Berdowski, the head of Boskalis, the specialty company that was asked to move the Ever Given. He said his team and experts from the Suez Canal Authority had "successfully refloated the Ever Given...thereby making free passage through the Suez Canal possible again."

It remained unclear when ships will be permitted to enter the canal for normal passage. At least 367 ships, carrying everything from oil to cattle, are waiting to pass at both ends of the canal.

It is estimated that it could take more than 10 days to clear the number of waiting ships. Many ships did not wait and left to travel around the Cape of Good Hope at Africa's southern tip. That route takes two weeks longer because it adds 5,000-kilometers. It also costs hundreds of thousands of dollars more.

The freeing of the Ever Given succeeded after heavy equipment pulled up dirt that was holding the front of the ship in place. Ten tugboats pushed and pulled it for five days. Early Monday morning the ship began to pull free.

It was not clear if the Ever Given would continue to its original destination, Rotterdam, or if it would go to a port for repairs.

The Ever Given flies the flag of Panama and is owned by a Japanese company. It normally carries goods from Asia to Europe.

Officials did not offer a time for the canal to reopen. The Suez Canal carries over 10 percent of international trade, including seven percent of the world's oil. Over 19,000 ships passed through last year, said canal officials.

The shutdown had threatened to stop oil and gas shipments to Europe from the Middle East. It caused fears of extended delays, shortages and rising costs for most of the world's economies.

The operation to free the Ever Give succeeded using only the tugboats and other heavy equipment. Canal officials did not have to lighten the ship by removing its 20,000 containers.

route – n. a way, or path, to get from one place to another

tugboat – n. a small powerful boat that is used for pulling or pushing ships in harbors

horn – n. a device that is used to make a loud noise

stuck –adj. unable to be moved from a position

destination –n. the place where someone or something is going