Update Required To play the media you will need to either update your browser to a recent version or update your Flash plugin.
By Dan Friedell
08 January, 2016


A man shot a police officer in Philadelphia on Thursday and said he did it to support the Islamic State terror group.

Officer Jesse Hartnett was hit multiple times after a 30-year-old man fired 13 shots into his vehicle.

Hartnett was wounded, but managed to return fire, striking the attacker multiple times. 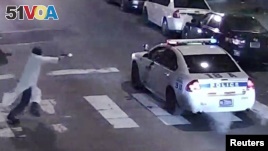 A still image from surveillance video shows a gunman approaching a Philadelphia police vehicle in which Officer Jesse Hartnett was shot shortly before midnight Jan. 7, 2016, in Philadelphia, Pennsylvania.

Hartnett is expected to recover. He was shot three times in the arm.

The shooter was captured later by other Philadelphia officers.

Police Captain James Clark says after the shooter was captured, he pledged his allegiance to the Islamic State terror group.

Hartnett will require multiple surgeries to repair his gunshot wounds.

But Ross says "this could easily have been a police funeral."

VOANews wrote this story. Dan Friedell adapted it for Learning English. Kathleen Struck was the editor.

What do you think of what happened in Philadelphia? We want to hear from you. Write to us in the Comments section or on 51VOA.COM.

surgery – n. medical treatment in which a doctor cuts into someone's body in order to repair or remove damaged or diseased parts