Update Required To play the media you will need to either update your browser to a recent version or update your Flash plugin.
By Ashley Thompson
25 October 2021


With computer-created imagery, Hollywood filmmakers can produce just about anything: detailed universes, trips to outer space, travels to the future or the distant past.

Yet, many movie productions still use real guns during filming. And even with strong rules and requirements about the use of such weaponry, people can get killed.

That is what happened last week in the state of New Mexico. The famous actor Alec Baldwin used a prop gun on the set of the movie, Rust. According to court documents, an assistant director had announced on set that the gun was "cold," meaning it had no ammunition and was safe to use. But, he was wrong.

Souza was treated at a hospital and is recovering.

The term "prop gun" can be used for anything from a rubber toy to a real firearm that can fire live ammunition, like a bullet. 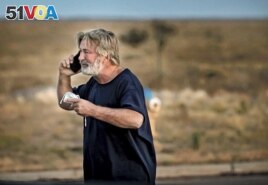 Alec Baldwin speaks on the phone in the parking lot outside the Santa Fe County Sheriff's Office in Santa Fe, N.M., after he was questioned about a shooting on the set of the film "Rust" on the outskirts of Santa Fe, Thursday, Oct. 21, 2021.

Movie making sometimes involves ammunition called blanks, which have everything needed to fire the gun but does not include a bullet, or other dangerous projectiles.

Still, even blanks can hurt or kill someone who is close by, says the Actors' Equity Association, a labor group.

The tragedy has led people in Hollywood and the general public to ask: Why are real guns ever used on set, when computers can create gunshots after filming?

Alexi Hawley is the producer of a police television show called The Rookie. Following Hutchins' death, he wrote to his employees that there "will be no more ‘live' weapons on the show." Hawley's note was first reported by The Hollywood Reporter and confirmed by The Associated Press.

Craig Zobel is director of the popular series Mare of Easttown. He called for the whole industry to follow Hawley's lead. He said gunshot effects on his show are added after filming.

"There's no reason to have guns loaded with blanks or anything on set anymore," Zobel wrote on Twitter. "Should just be fully outlawed. There's computers now," he wrote.

Bill Dill is a cinematographer who taught Halyna Hutchins at the American Film Institute. The 42-year-old Hutchins was considered a rising star in her field.

He expressed anger over the continued tradition of using real guns loaded with blanks. Dill said there was added danger from real guns because "people are working long hours" on films and are usually very tired.

"There's no excuse for using live weapons," he added.

A petition was launched over the weekend on change.org for real guns to be banned from production sets. "There is no excuse for something like this to happen in the 21st century," the petition said of the tragedy.

The petition appealed to Alec Baldwin directly "to use his power and influence" in the industry and support "Halyna's Law." The law would ban the use of real firearms on set.

Many in the moviemaking industry are calling to ban blanks and only use representations of guns or real guns that cannot be fired.

Liz Garbus is a movie director. She wrote on Twitter, "Really, there is no good reason in this day to have blanks on set." She added that computer-generated imagery, or CGI, "can make the gun seem ‘real.'"

Using CGI instead of using a real weapon creates additional costs for directors and others in the film industry. Garbus said if a project does not have the money for CGI, it should cut gunfire action from the production.

Broadway actor and writer Harvey Fierstein says the tragedy makes him question why Hollywood is not depending more on special effects.

"Why, with all of the Hollywood magic available, are they still firing off gun powder?" he wrote on Facebook. "Why chance an accident in the first place?"

But he also said Hutchins' death raised even bigger questions.

"With all of that Hollywood talent and imagination [why] are we still writing stories about shooting one another?" he asked. "Do we really have nothing better to spend millions of dollars on than the glamorization of gun battles?"

cinematographer – n. a specialist in the art, process, or job of filming movies

glamorization – n. the act of making something seem exciting and appealing