Update Required To play the media you will need to either update your browser to a recent version or update your Flash plugin.
By Dan Novak
03 April 2021


A computer chip shortage has left several manufacturing industries struggling. Makers of products such as video game consoles, smartphones and cars are among those affected.

Computer chips are small devices that contain electrical circuits and are used in computers and other electronics.

The shortage began in December. At that time, many manufacturers misjudged demand for products like laptop computers and smartphones. Sales for these internet devices sharply increased during the coronavirus health crisis.

Whirlpool is an international company based in the United States. It is one of the world's largest manufacturers of home products like ovens and refrigerators. Whirlpool China chief Jason Ai said the company's exports from China to Europe and the United States have decreased by as much as 25 percent in recent months.

Whirlpool cannot get enough microcontrollers: simple chips used in over half of its products. Ai said the company is struggling to meet the demand for appliances, while trying to fill "an explosion of export orders." 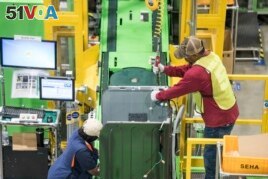 Other manufacturers are also struggling because of the chip shortage. Hangzhou Robam Appliances Co. Ltd. is a Chinese home goods maker. It had to delay the release of a new stove part by four months because it could not get enough microcontrollers.

Dan Ye is the company's marketing director. He said many of its products are built for high technology homes, "so of course we need a lot of chips."

With the shortage, companies are now having to compete to buy remaining chips to secure their own supplies.

Ye said that it is easier for the company to find chips in China than in other countries.

"Domestic chips can satisfy our needs completely," he said.

To deal with the shortage of microprocessors and memory chips, Dreame Technology cut its budget and hired extra employees just to communicate with chip suppliers. The company makes vacuum cleaners.

Dreame has also been forced to test chips that could serve as alternatives to the ones it normally uses.

"We're working to have deeper control of our suppliers," he said.

console –n. a flat surface that contains the controls for a machine or a piece of electronic equipment

circuit –n. a device providing a complete path for an electrical current

appliance –n. an electrical machine that is used in people's houses to perform a job

domestic –adj. relating to or made in your own country

alternative –n. something that can be chosen instead of something else