Should Birth in the US Automatically Give Citizenship?

Update Required To play the media you will need to either update your browser to a recent version or update your Flash plugin.
By VOA
22 August, 2015


Billionaire businessman Donald Trump wants to stop automatically giving U.S. citizenship to anyone who is born in the United States.

Mr. Trump is the leading Republican presidential candidate. He says automatic citizenship is the reason many women come to the United States illegally and give birth. He wants to cancel the 14th Amendment to the U.S. Constitution, which says "all persons born or naturalized in the United States" are citizens.

In five months, voters in some states will begin choosing the Republican party's presidential nominee. All of the seventeen Republican candidates have called for strong measures to stop people from entering the country illegally, especially from Mexico. But not all of them support ending automatic citizenship for people born in the United States. 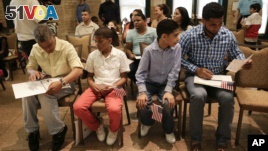 Derek Martinez, second from left, and Jason Victoria, second from right, watch as their fathers, Alex Martinez and Melvin Victoria place their certificates of citizenship in mounting folders after a ceremony at the Bronx Zoo, Tuesday, May 26, 2015, in New York. (AP Photo/Julie Jacobson)

Mr. Bush says people born in the U.S. have what he calls a "constitutionally-protected right" to become American citizens. Senator Rubio said he would support measures to stop women from coming to the United States illegally to give birth to children so their babies will automatically be citizens. But he says he does not support cancelling the 14th Amendment. Other Republican candidates say they support Mr. Trump's call for its cancellation.

The Center for Immigration Studies seeks to limit immigration to the United States. It says 30 of the world's 194 countries give citizenship to people born in their country. But it says the United States and Canada are the only two developed countries that do so. It says some foreign women are entering the United States as what it calls "birth tourists." It says they are giving birth to 36,000 babies yearly so that their children can become American citizens.

In 2010, the Pew Hispanic Center estimated that eight percent of the 4.3 million babies born in the U.S. in 2008 were the children of people who had entered the country illegally.

Automatic citizenship for those born in the United States has been part of the country's laws since the colonies declared their independence from England in the late 1700s. The new country's laws were based on English common law. But in 1857, the U.S. Supreme Court ruled that the children of slaves were not American citizens. The Constitution was amended after the Civil War in the 1860s. Anti-slavery northern states defeated pro-slavery southern states in the war. The Constitution was changed to make it clear that all black Americans and freed slaves were U.S. citizens.

At the end of the 1800s, the Supreme Court ruled that all children born in the United States are American citizens. However, children of diplomats, invading armies and those born on foreign public ships do not get automatic citizenship.

Conservative lawmakers in the United States have sometimes tried to end automatic citizenship, but they have never received much support.

Changing the U.S. Constitution is difficult. At least two-thirds of the House and Senate must support any change. If that happens, the proposed change is sent to the states, where at least 38 of the 50 state legislatures must support it before it can become part of the Constitution.

automatic – adj. always happening because of a rule, law or previous agreement

naturalized – adj. describing someone who was born in a different country who becomes a citizen of another country

amend – v. to change some of the words -- and often the meaning -- of a law or document

freed – adj. no longer held as a slave or prisoner

Do you believe people should automatically become citizens of a country in which they are born? We want to hear from you. Write to us in the comments section.