Should High School Graduates Do a Year of Service?

Update Required To play the media you will need to either update your browser to a recent version or update your Flash plugin.
By Dan Novak
25 October 2022


As high school graduates enter adulthood, some may be unsure of what to do next. They might not be ready to attend college. They might not have the skills to get a job. And some do not know what kind of career they want.

Wes Moore is a Democratic candidate for governor in the American state of Maryland. As part of his campaign, Moore proposed to create a paid community service year for such graduates who are unsure of their next steps.

Moore said the graduates would volunteer with non-profit groups and community organizations. In exchange for their service, they would receive job training and mentorship. They can also get money to pay for college. 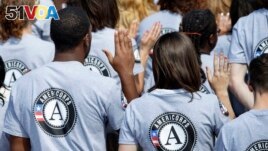 Before his run for governor, Moore was involved with Service Year Alliance, an organization that works to connect those looking to serve with groups across the country in need of volunteers.

Kristen Bennett is the president of Service Year Alliance. She said national service or community service, should be a "common expectation and opportunity" for all Americans. She compared it to getting an internship or attending college. And she suggested that Moore's plan could make that happen.

Moore's program would be similar to the existing Americorps program. It is a federal government program that connects volunteers with organizations nationwide. Volunteers can do things like cleaning up disaster areas, helping environmental efforts, working in afterschool programs, or assisting military veterans. Many are also involved in COVID-19 programs.

Americorps volunteers receive very little money for their work. Bennett said that makes it "impossible for youth from marginalized backgrounds and communities to participate without financial support." She added that "this is something we think is really important to see change."

Public studies show that voluntary service is a popular idea across political lines. Voices for National Service found that 88 percent of Democrats and 74 percent of Republicans favor an expansion of voluntary national service in a 2020 study.

Supporters like Bennett see national service as a way to make the country less divided. "Service year brings people from different backgrounds together around a shared experience that builds empathy and understanding," she said. "When...you're working together to address a very challenging issue in the community it becomes easier to put aside your political or religious or socioeconomic differences."

Several candidates for president, including John McCain, Hillary Clinton and Pete Buttigieg, proposed to expand national service programs. And a bill that would have required young Americans to do two years of national service failed in Congress.

Critics say requiring national service is a bad idea. They say the government should not force anyone to do work and doing so might violate the U.S. constitution.

Doug Bandow is with the Cato Institute. The organization supports "individual liberty, limited government, free markets, and peace." In 2019, Bandow wrote, "Mandatory universal national service would conflict with deeply held American values, violate the Constitution, create an administrative nightmare, and undermine its own objective of creating a more caring America."

He concluded: "Such an approach is a bad idea whose time has not come."

graduate — n. a person who has earned a degree or diploma from a school, college, or university

mentor — n. someone who teaches or gives help and advice to a less experienced and often younger person

intern — n. a student or recent graduate who works for a period of time at a job in order to get experience

veteran — n. someone who fought in a war as a soldier, sailor, etc.

marginalize — v. to put or keep (someone) in a powerless or unimportant position within a society or group

unique — adj. used to say that something or someone is unlike anything or anyone else

challenging — adj. difficult in a way that is usually interesting or enjoyable

nightmare — n. a dream that frightens a sleeping person