Should Whales Be Hunted or Watched?

Update Required To play the media you will need to either update your browser to a recent version or update your Flash plugin.
By VOA
03 December, 2012

This is SCIENCE IN THE NEWS in VOA Special English. I'm Shirley Griffith.

And I'm Christopher Cruise. Today, we tell about whales. Some people want to hunt the animals, while others simply enjoy watching them in the wild. We tell about a plan for an American aquarium to import beluga whales from Russia. And we talk about a whale that could make human-like sounds.

Environmental activists in South Korea are condemning a government plan to hunt endangered whales for scientific research. They believe the plan is part of an effort to re-start commercial whaling activities. Such activities are banned in many countries. 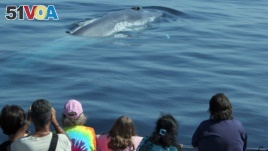 Spectators watch whales off the coast of southern California
South Korea announced the proposal in July at a meeting of the International Whaling Commission in Panama. The head of the South Korean delegation said the plan was needed to answer questions about minke whale populations. He said the hunt would take place near the South Korean coast. But he did not say how many of the animals would be caught.

The International Whaling Commission has yet to make a decision on the South Korean plan.

The organization banned commercial whaling in 1986 because of concerns about the survival of whale species. But now, some South Korean fishermen say they are facing a threat from minke whales. They say these animals are eating what would have been their catch.

Korea has a long history of whaling. Cave paintings found on the south coast show images of whale hunts. But such hunts and the use of whale meat as food did not really become popular until late in the nineteenth century.

Every year, the South Korean town of Ulsan holds an event that re-creates those whaling expeditions. Visitors are urged to eat at local restaurants that serve whale meat.

South Korea's Ministry of Agriculture and Fisheries says the goal of the plan is to help fishermen. It notes that limited whaling for scientific research is permitted under the commercial whaling ban. Japan has continued hunting whales under this exception.

Critics of whaling do not believe claims by Japan that its whaling activities are for scientific research. They note that whale meat from the hundreds of whales killed in the hunt is sold to the Japanese public.

Recently, we asked the International Whaling Commission about the South Korean request. Commission spokesman Simon Brockington told VOA by e-mail that since the July meeting, "there has been no further communication from the Government of the Republic of Korea to the IWC on this issue."

The next meeting of the commission's Scientific Committee is set for next year. Mr. Brockington said the IWC's rules require "governments to provide the Commission's scientific committee with copies of the proposed permits in time for them to be reviewed."

He added that "at the current time, no such copies have been received."

Four months ago, the South Korean government reported to the country's lawmakers about the plan to re-start whaling. A Foreign Ministry official says the plan is still under consideration.

She says the government will listen to the opinions of concerned organizations and members of the International Whaling Commission.

Earlier in this report, we heard from Han Jeong-hee of Greenpeace. She says pro-whaling forces appear to be in control of the South Korean government.

"Suddenly they just reported this about the task force and going back to the scientific whaling decision. This is very disappointing. We hope the government change their mind again and go for non-lethal research."

Lee Hae-chan is the head of South Korea's main opposition. He says some people in coastal communities support the idea of research whaling because it will help the local economy.

Mr. Lee admits that his country no longer faces poverty and does not need whale meat for protein. But he says if there is a true need for scientific research, limited whaling might be acceptable.

Lee Man-woo is vice representative of the Whale Culture Preservation Association in Ulsan. He and others say whaling has been a part of Korean culture for thousands of years. He also says meat from hunted whales should not be wasted. His group says it should be sold at a reasonable price to foreign tourists and to those who like to eat whale meat. Recently, a small serving of meat sold in Ulsan for up to $50.

Both South Korea and Japan say there are so many whales in their waters that these largest of all mammals are eating too much fish.

Japan has been widely criticized for its research program. Thousands of whales have been killed in the northern Pacific and near Antarctic waters since the 1980s.

An aquarium in the American state of Georgia wants to import eighteen beluga whales from Russia. The United States currently has 31 beluga whales. They are living in six aquariums and marine parks. Four of them are at the Georgia Aquarium in Atlanta.

The Georgia Aquarium has asked the National Oceanic and Atmospheric Administration for permission to import the beluga whales. If approved, aquarium officials would send some of the animals to the other facilities.

The Georgia Aquarium says it hopes to use the beluga whales in research, education and breeding programs. They currently are being held at a Russian research center. Yet many people oppose the plan. They say it is wrong to keep any wild animal captive.

In October, the National Oceanic and Atmospheric Administration held a hearing on the proposal. More than 130 people attended the meeting. NOAA says it received about eight thousand nine hundred written comments about the Georgia Aquarium's plan. Because of the great interest in the subject, the agency gave 60 days for public comments. Usually, people are given 30 days.

NOAA officials are studying how the beluga whales might be affected by being brought to the United States. They also want to know whether the Georgia Aquarium and its partners can properly care for the whales and how they might be used in educational activities.

The federal Marine Mammal Protection Act sets rules which NOAA must consider when deciding whether these animals may be imported. NOAA officials told VOA they plan to make a decision on the request by early next year.

Recently, beluga whales were in the news for another reason. The journal Current Biology reported that one of the whales made human-like sounds.

Researchers had been caring for the whale for years before it died in 1999. Over many hours, they recorded what they say is the whale repeating human speech it had just heard. The researchers say the whale's natural sounds changed as it heard more humans speaking. They admit that the recording does not sound like human speech. But they say these "inflections" are like those of a human voice.

The researchers say the sound is unlike those that whales make naturally, but not "unlike those of the human voice."

The researchers believe this is evidence of what they call "spontaneous mimicry of the human voice, presumably a result of vocal learning." In other words, they suspect the beluga whale was copying the sounds made by humans.

Four years after the whale started making the human-like sounds, it stopped. The researchers say the times when the whale most sounded like a human were never recorded.
Related Articles
go top