Update Required To play the media you will need to either update your browser to a recent version or update your Flash plugin.
By Phil Dierking
14 July, 2018


For many years, the Muppets have captured the imagination of children and adults worldwide.

The Muppets were the creation of the American puppeteer Jim Henson. He used the term Muppet for his puppet act.

Many people first learned about the Muppets through Sesame Street, a children's program on public television in the United States. The Muppets later had their own TV show and have appeared in movies.

Recently, a traveling exhibit called "The Jim Henson Exhibition: Imagination Unlimited" opened in Los Angeles, California. It can be seen at the Skirball Cultural Center. Visitors are able to take a close look at some of the most beloved Muppets, including Kermit the Frog, Miss Piggy and The Count. The exhibit helps to show what is required to bring them to life.

"If you learn from Sesame Street, he (The Count) teaches you how to count. There's Cookie Monster, he does the ABCs every episode," said 9-year-old Elli Fire. She spoke to VOA during her visit to the Skirball Cultural Center.

Jim Henson's oldest daughter, Lisa, says she is excited for people to understand that her father was an artist with many abilities and a creative mind.

Lisa Henson is now the president and chief executive officer of The Jim Henson Company, which is based in Los Angeles. She remembers that her father wanted the family to be involved in The Muppets. 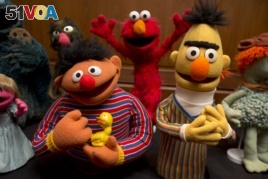 Bert and Ernie, as well as Elmo, center, are among a donation of additional Jim Henson objects to the Smithsonian's National Museum of American History in Washington, Sept. 24, 2013.

"He would love to tell us how the best techniques of puppet building or the new innovations that they would make in terms of mechanics or electronics and how he was advancing the technology."

The wide popularity of Henson's work led to TV series such as The Muppet Show and Fraggle Rock. Within a short time, the Muppets became famous in other countries.

Barbara Miller is senior curator of Collections and Exhibitions at Museum of the Moving Image in New York. She said that Jim Henson understood the popularity of the Muppets, and that they reached children and adults around the world.

"Remember The Muppet Show was seen in 135 countries at its height," she said.

Miller added that her museum in New York has a permanent Jim Henson exhibit.

Lisa Henson said her father felt a duty to be hopeful about the future and to support good values like acceptance, tolerance, individualism and diversity.

The exhibit not only has more than 100 objects and 25 historic puppets; visitors also can see what it took to bring the Muppets to life.

"You can see original sketches, actually notes of the very beginnings of ideas all the way through to finished puppets," said Lisa Henson.

The show is a creative experience that tells the life story of Jim Henson and his work from the 1930s to 1990, when he died.

Although computer-made images may have replaced some puppets in Hollywood productions, Lisa Henson said the art of puppetry is still important today.

"It gives it a kind of immediacy in performance and intimacy that people connect to that and they kind of feel like the puppets are a little more alive and so I don't think puppets will ever go entirely out of style."

Miller said the aim is to continue to take the Jim Henson exhibit to other U.S. cities and overseas.

Elizabeth Lee wrote this story for VOANews. Phil Dierking adapted the story for Learning English. George Grow was the editor.

Do you think puppets are still popular with people? Write to us in the Comments Section or on 51VOA.COM.

curator - n. a person who is in charge of the things in a museum, zoo, etc.

diversity - n. the state of having people who are different races or who have different cultures in a group or organization

exhibit - n. to make (a painting, sculpture, etc.) available for people to see

mechanic - n. a person who repairs machines (such as car engines) and keeps them running properly

puppeteer - n. a person who uses puppets in performances to entertain people

sketch - v. a quick, rough drawing that shows the main features of an object or scene

technique - n. a way of doing something by using special knowledge or skill

tolerance - n. willingness to accept feelings, habits, or beliefs that are different from your own