Update Required To play the media you will need to either update your browser to a recent version or update your Flash plugin.
By Dan Friedell
02 February, 2016


Nearly 700 animals in North Carolina are safe after being rescued from a shelter.

The American Society for the Prevention of Cruelty to Animals (ASPCA) saved dogs, cats, horses and pigs from awful living conditions.

The ASPCA spokesperson says the animals were dirty, sick, thirsty and hungry.

The shelter was supposed to help and care for the animals. But many of the animals were sick and neglected.

The state and local sheriff's office investigated the shelter after people complained. They said the animals they adopted were sick and not cared for.

The ASPCA says it the largest rescue in the history of the organization.

Police arrested the owners of the shelter on charges of animal cruelty.

The ASPCA is taking care of the animals in a large warehouse. Ten animal doctors are helping. 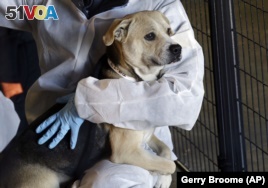 A worker with the American Society for the Prevention of Cruelty to Animals holds a rescued dog, one of hundreds being treated in a warehouse about an hour southwest of Raleigh, N.C. (AP Photo/Gerry Broome)

The animals are part of a crime investigation, so they will be held as evidence until North Carolina decides what to do with them.

Dan Friedell adapted this story for Learning English based on information from Reuters and the Washington Post. Kathleen Struck was the editor.

What do you think should happen to the animals? We want to hear from you. Write to us in the Comments Section or on 51voa.com.

cruelty – n. actions that cause suffering

neglect – v.  to fail to take care of or to give attention to (someone or something)